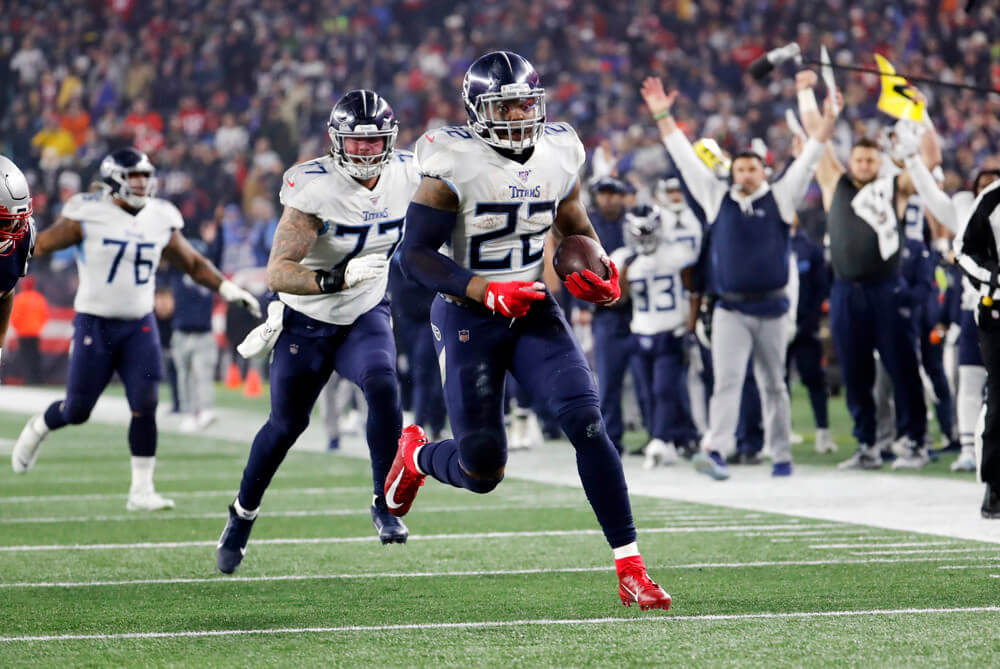 Over the first six weeks of the NFL season, at least one team has overcome a deficit of 16 points or more and won. It’s never happened before in league history. Take a look at this week’s spreads and see if you can predict which team will do it in Week 7.

The Giants aren’t going to quibble about winning on a 43-yard fumble return by a seventh-round draft pick (linebacker Tae Crowder) on a day Daniel Jones threw for only 112 yards. But they are going to need to be much better against an Eagles team that almost wiped out a 17-point deficit to beat the Baltimore Ravens. Take the Giants and the points.

A battle of unbeatens, unquestionably the best game of the week. Here’s what we’ll be watching: The Steelers defense leads the NFL for the first time since 1985. But what’s it going to do to stop Derrick Henry, who gained 222 yards against the Houston Texans on Sunday to become the first player in league history to have at least one 200-yard rushing game in three straight seasons. Tennessee wins this by a field goal.

Listen, we have no problem with Ron Rivera’s failed decision to go for two at the end of the Football Team’s game against the Giants. He could have settled for a tie and overtime. But what fun is that? Thing is, we don’t think he’ll be in that position this week against the Cowboys. We like Dallas to easily cover.

There’s no question the J-E-T-S Jets, Jets, Jets are the worst team in football. Listless only begins to tell the story of their loss in Miami on Sunday. Worse yet, defensive coordinator Gregg Williams was a bit snippy last week, blaming some of his unit’s problems on the Jets’ inefficient offense. Normally, we like the underdogs getting 11 points. But not this time. Go big on Buffalo.

The Panthers had won three straight heading into their game against the Chicago Bears on Sunday. And they were pretty happy with themselves knowing they’d done it without the injured Christian McCaffrey. But their offense sputtered and they lost 23-16. The question is, do they have enough to go into New Orleans and beat the Saints? They won’t win, but we like them to cover.

After taking a 10-0 lead into the second quarter Sunday at Tampa Bay, the Packers allowed 38 unanswered points and absorbed one of their worst defeats in years. Aaron Rodgers said it was an ass kicking his the team needed. Fair enough. But they better not take the Texans lightly. They’re 1-5 but playing a lot better the last two weeks under interim coach Romeo Crennel. Take The Pack to cover.

The Browns came into Sunday’s game against the Steelers 4-1. But they left battered and bruised. That went double for Baker Mayfield, who was mercifully pulled in the second half to protect his injured chest from further harm. We still think the Browns are a pretty good team, good enough to cover against the Bengals, who blew a 21-point lead to Indianapolis and lost.

We’ve been waiting for the Lions defense to make coach Matt Patricia look good and it finally happened on Sunday when they held Jacksonville to 44 yards rushing. Still, now that the Falcons have finally won, we suspect they’ll experience somewhat of a renaissance over the final two months now that Matt Ryan and Julio Jones are all warmed up. Take the Falcons.

The Seahawks are 5-0 for the first time in franchise history. Russell Wilson is having an MVP season (19 TD passes) playing catch with DK Metcalf and Tyler Lockett, one of the league’s most fearsome receiving combinations. While we’re certain Seattle will not go unbeaten, we don’t think their first loss will come this week. Take Seattle to cover on the road.

If you hate the Patriots, you’ll be happy to know the franchise (2-3) hasn’t been below .500 after five weeks since 2002. You figured they’d pound the Broncos at home after having an extended period of time to prepare, especially with Cam Newton and Stephon Gilmore back after having COVID-19. Of course, you would have been wrong. Question is, can they bounce back against a 49ers team buoyed by a big win over the Rams? We say no. San Francisco will cover.

The Broncos win over the Patriots was made possible by six field goals from the ultra-reliable Brandon McManus. He scored all the points in their 18-12 win. That’s not going to get it done against the Chiefs, who you figure will be just about hitting their stride about now. Take the Chiefs to cover.

Tom Brady threw two TD passes and had a quarterback rating of 104.9 in beating the Packers. One of those scoring passes was to The Gronk, a nostalgic look back their time together in New England. More importantly, the Bucs defense allowed only 201 yards and that’s why we think they’ve give the Raiders, coming off their win over the Chiefs and their bye, a tough time. Brady over Gruden.

The Bears (5-1) are in first place of the NFC North, a half-game ahead of the Packers. And while this is a source of encouragement in Chicago, we’d counter by reminding everyone that their offense is still blah, even with Nick Foles at QB. They gained only 261 yards (63 rushing) against the Panthers. The Rams are going to be pissed off after their loss to the 49ers so go to the bank in anticipation they’ll cover.