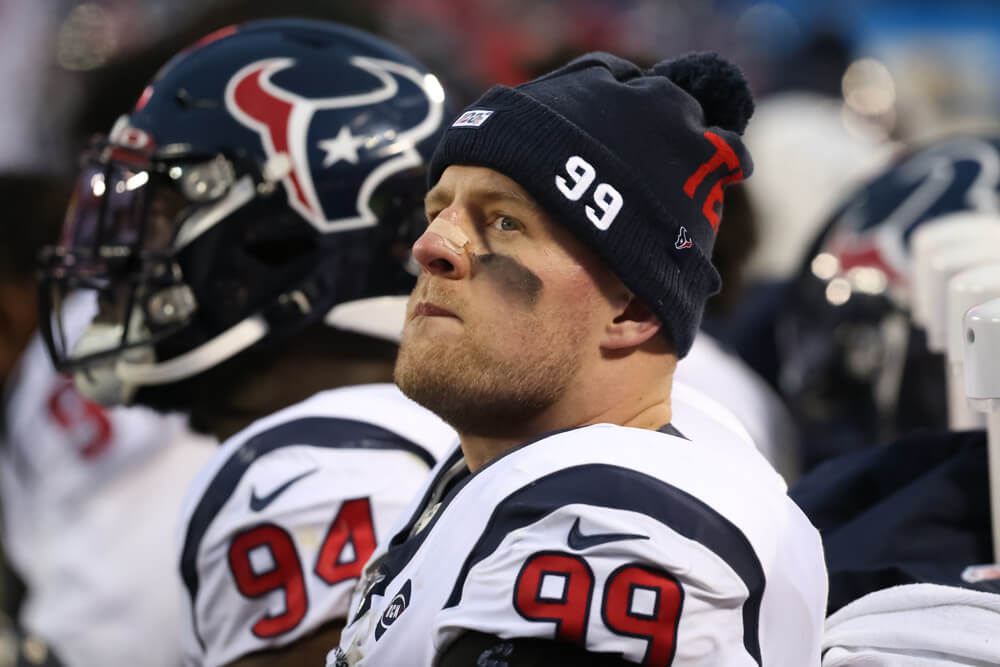 Another person very close to the NFL who previously expressed concerns about the upcoming season appears to be confident about the possibility games will move forward as planned.  Houston Texans star defensive end JJ Watt seemed to be worried about whether or not there will be any games due to the COVID-19 pandemic.

There has been a constant battle for the league to satisfy all doubts concerning the 2020 season, and players are vocal about the safety and health measures that must be taken for the upcoming season to start on time.  However, Watt might have flipped and is now more supportive of NFL football, which could be a good sign that progress is being made.

JJ Watt shared some of his doubts about COVID-19 protocols on his Twitter back in July, saying at the time, “In the interest of having everyone on the same page in terms of what we know and don’t know at this time, here are a few things I’ve learned being on four NFLPA calls in the last two weeks with hundreds of other players. Keep in mind our rookies are scheduled to report in 48 hrs.”  Watt posted a list of aspects that players know, and other things players don’t know about the coming season.  The first thing mentioned is that everyone wants to play and be as safe as possible.

Watt also stated that players hadn’t received a single valid IDER (Infections disease emergency response) plan.  Among the other aspects he mentions were the uncertainty about the preseason games and the uncertainty concerning the daily testing or semi-daily testing.  JJ Watt also insisted on knowing how a potential positive COVID-19 test might impact contracts, roster spots and other issues.

The entire preseason was canceled, and training camps were moved back a few weeks ahead of the 2020 season.  These changes made some players feel concerned about the season. Watt was one of these, and he became deeply involved in the process of the NFLPA meetings.  He actually used his Twitter account to express his feelings, as did many other NFL players who felt worried.  In the end, 66 players decided to opt-out of the 2020 season due to different reasons, but mostly because of the pandemic threat.

The NFL Looks A Little Different To Watt Now

Watt now looks more optimistic about the upcoming season and he changed his tune a little bit.  Watt told Peter King of NBC Sports that he believes that Week 1 will happen on time.  NFL has put forth a big effort to show the league is prepared and that it has a better approach to the current situation.  Even though 56 players tested positive some weeks ago, the majority of them are back in full health. Watt is now more likely to remain positive that the season will start on time on September 10.

Showing a more positive attitude to the COVID-19 situation than back in July, JJ Watt said, “I believe Week 1 will happen.” He adds, “Because again, in the situation that we’re in, we have a great amount of control over our building.  It’s not a bubble so we can’t control what guys are doing outside of the building. But we have the fines in place and obviously you hope for accountability and trust within your team.”

The Texans are doing everything they can to advise players to keep social distancing policies in mind.  What’s more, the Texans have their own hotel where the team is corralled, so this will prevent them even more from having contact with other people.  The New Orleans Saints and others are following suit.  The resilience of all 32 NFL teams will be tested in the aftermath of Week 1.

JJ Watt asserts, “But theoretically, until that first game, you can somewhat control everything around you.  Once you get on a plane, you go to another city, we’re still gonna try and control as much as possible. But then you get into the fall season as well, you start getting the flu and other things mixed in. Then your risk level goes up. But as far as Week 1? I’m optimistic.”

In The NBA, Even The Draft Lottery Is Going Virtual
Vik’s PGA Picks: Wyndham Championship
Get Free Picks & Exclusive Offers