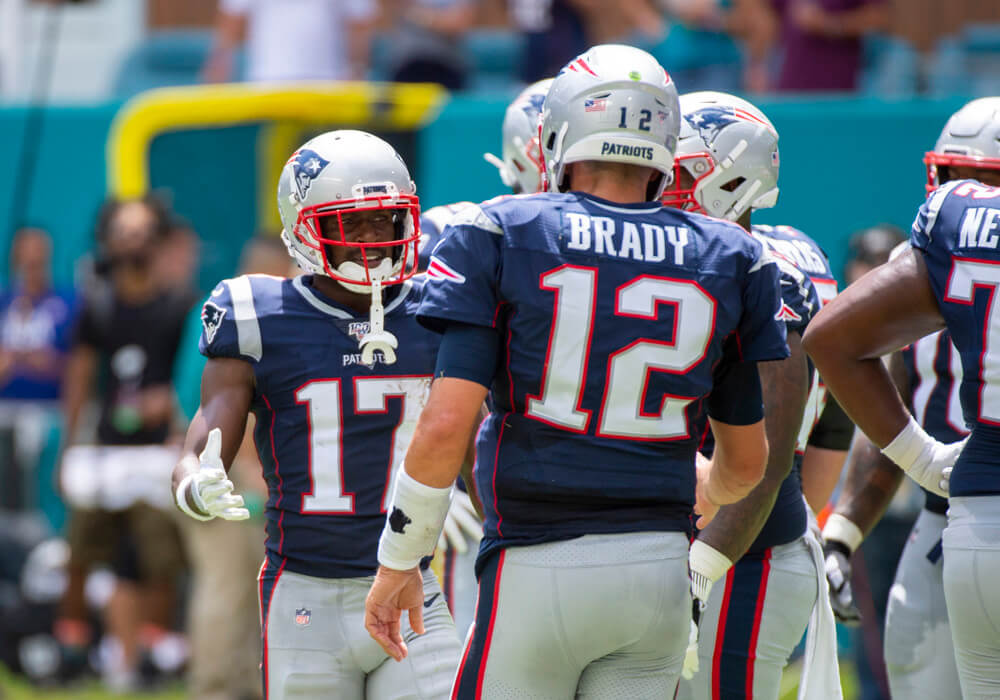 The NFL has taken a backseat to MLB during the World Series, but, now that is over and done with and the LA Dodgers are World Series Champions for the first time in 32 years, it is time to put all focus on football.  Week 8 is going to give some players the chance to show who they really are, or prepare to go home.

The big news coming out of the NFL this week must be the signing of Antonio Brown by the Tampa Bay Buccaneers as Tom Brady continues to feather his new nest down in Tampa with players that he knows and trusts like Rob Gronkowski, who joined the Bucs shortly after Brady signed on.

Brown, a former Pro Bowl receiver, has been under suspension for a variety of questionable off-field activities earlier in the season and will just become eligible to play again in Week 9 for his new team.  The last time Brady and Brown were together on a football field they were both dressed as New England Patriots.

Although the troubled receiver didn’t last very long with the Pats, it was evident in Game 2 against the Dolphins in 2019 that the chemistry between the veteran quarterback and Brown was for real as he caught 4 of 8 targets for 56 yards and a touchdown. Tampa Bay fans are anxious to see if that connection still exists.

Thus far in 2020, the Tampa Bay football program appears to be going in the opposite direction from the New England Patriots, which has been floundering in the first weeks of NFL action this season.  Bill Belichick, who has been the Patriots head coach since 2000, cannot be too happy about that development.

Week 8 in the NFL is shaping up to be a good one with some marquis matchups on the agenda beginning when the always tough Baltimore Ravens at 5-1 will host big Ben Roethlisberger and his undefeated 6-0 Steeler team for the first big test that either team has faced so far this season. This should be a good one.

Oddly enough, the Ravens are -3.5 point favorites for the matchup on CBS at noon this Sunday.  The over and under for the game is currently at 46.5 but could inch up a bit depending on the weather and injury reports.  Meanwhile the Patriots are only getting 3.5 points against a 5-2 Buffalo Bills team who continue to be contenders into Week 8.

The Chiefs On Track For The Playoffs

The Kansas City Chiefs, on the other hand, are -19.5 against a visiting New York Jets team that has yet to win a game this season.  The hapless Dallas Cowboys will be visiting the Philadelphia Eagles for Sunday Night Football in Week 8 in what used be a rivalry between two teams who normally sport a winning record this time of the year.

But the Eagles and the Cowboys have only racked up two wins apiece so far this season and the Cowboys are once again the underdogs at +7.5 for the game.  Cowboys owner Jerry Jones was visibly unhappy berating Dallas head coach Mike McCarthy out on the field after the Cowboys embarrassing 25-3 loss to a Washington team that still cannot come up with a nickname to replace the ‘Redskins’, which they were forced to forgo earlier in the year.

Run CMC Back In Action

The big news down in the Carolinas is that Pro Bowl running back Christian McCaffrey is slated to come off of the Injured Reserve list and return to action on Thursday Night Football when the Carolina Panthers, currently at 3-4, host the one-win Atlanta Falcons as 2.5-point favorites.

Finally, Odell Beckham Jr. has torn his ACL last Sunday against the Bengals and has been moved to Injured Reserve.  Sorry Baker, OBJ is done for 2020.