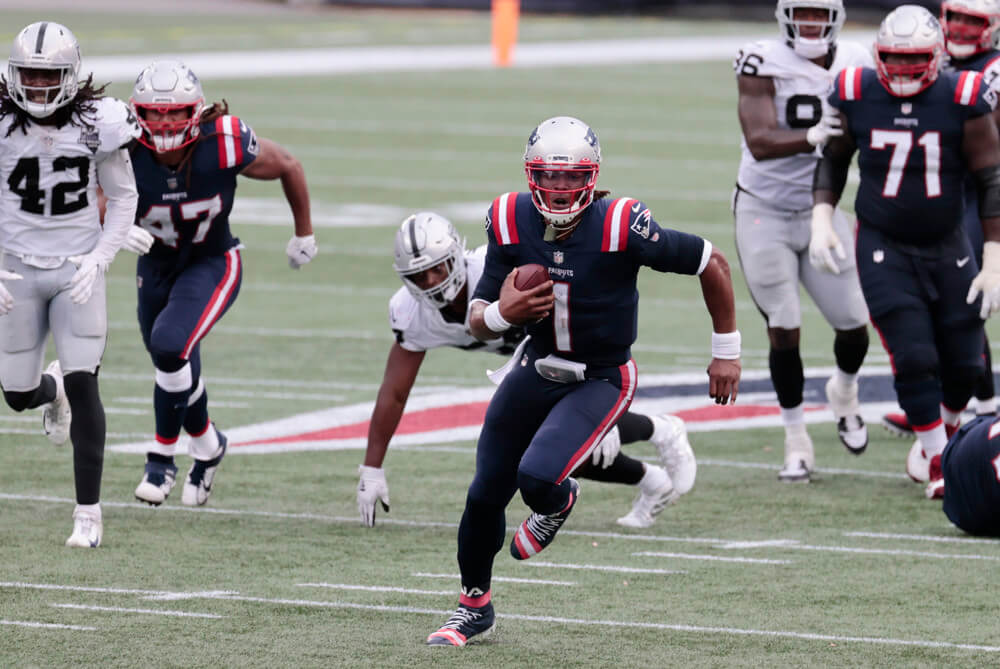 There are still four unbeaten teams (Seattle, Green Bay, Pittsburgh and Tennessee) remaining in the NFL as we head into Week 6. How long will it be before injuries have something to say about that?

The New England Patriots usually don’t need help to get things accomplished, but missing last weekend’s game because of COVID concerns bought the team valuable time to get well.

Earlier this week, quarterback Cam Newton, arguably one of the most important players on the team, returned from the COVID list and was cleared to play against Denver on Sunday.

Newton had been on the reserve list since Oct. 3. He missed the Pats’ 26-10 loss to the Chiefs. That night, backups Brian Hoyer and Jarrett Stidham combined for four turnovers and generally gave the game away.

Newton has completed 68.1 percent of his passes for 714 yards, two touchdowns and two interceptions. He has also rushed for 149 yards and four touchdowns, a mark that led the NFL for QBs before he got sick.

The return of Newton gives the Patriots a plausible chance of covering the 91/2-point spread, even with Drew Lock ready to reappear at QB for the Broncos.

To be honest, the San Francisco 49ers have dealt poorly with an unending string of injuries on both sides of the ball. But no injury has been more high profile than the high ankle sprain suffered by QB Jimmy Garoppolo.

He missed two weeks and didn’t have a full practice until last Friday. And it showed in his performance in the 49ers abysmal home loss to the Miami Dolphins. He lacked mobility and was sacked three times in the first half for 23 yards.

You figure Garoppolo will be only marginally better this week and it will be interesting to see if the 49ers start him against the Los Angeles Rams or go back to C.J. Beathard, who replaced him in the second half against the Dolphins.

Surprisingly, the 49ers are only a 3-point underdog, even with the prospect of Beathard under center. This is a crucial week for San Francisco, with both LA and Seattle running away in the NFC West. But we like the Rams.

When you think about the Arizona Cardinals, it’s understandable if you’re naturally drawn to Kyler Murray and DeAndre Hopkins, who formed one of the league dynamic pass-catch combinations this season.

In reality, linebacker Chandler Jones is just as important to the success of the team and his season ended last week against the New York Jets when he suffered a severe biceps injury.

Jones is Arizona’s highest paid player and his loss is really going to hurt. He’s coming off a 2019 season during which he had 19 sacks and forced a league-high eight fumbles.

We suspect the loss of Jones will greatly impact their game with week against Dallas. The Cardinals come in a 11/2-point favorite. Take the Cowboys in the upset.

The surging Carolina Panthers are not interested in hurrying halfback Christian McCaffrey back from his ankle injury. And why should they be? They’ve won three straight since he was injured, a credit to backup Mike Davis and rookie coach Matt Rhule, who has done a fantastic job keeping his team on the rails.

It’s more than likely McCaffrey will play next week when the Panthers head to New Orleans for a critical NFC South game. Then again, the team might also buy itself more time and wait until its Oct. 29 Thursday Night home game against Atlanta.

Sunday’s game against the Cardinals begins life without Dak Prescott for the Cowboys. But unlike a team like the New York Giants, whose backup to Daniel Jones is Colt McCoy, Dallas has the more-than-competent Andy Dalton ready step in. This will work to its advantage as the season carries on. …Kyle Allen will start for Washington against the Giants. The Football Team never seriously considered going with Alex Smith, even after his emotional return to the league last week after Allen’s injury. By the way, Dewayne Haskins, now Washington’s third-string QB, rejoined the team after being away last week with an undisclosed reason. …Baker Mayfield has been brought slowly along this week in practice after injuring his ribs last week. There’s no chance he’ll miss Sunday’s showdown with the Steelers. But we’ll take the Steelers, a 31/2-point favorite. …Sam Darnold (shoulder) is not close to returning for the woeful Jets (0-5). That means another week of old and slow Joe Flacco and a great chance for the Dolphins to make you some money even as a 81/2-point favorite.

Davante Adams (hamstring) will play in Green Bay’s Sunday’s game against Tampa Bay and A.J. Green (hamstring) is good to go for the Bengals against the Indianapolis. But Julio Jones (hamstring) hasn’t practiced with Atlanta and DeSean Jackson (hamstring) and Alshon Jeffrey (foot) are both questionable as the Eagles prepare to host Baltimore. …The Browns have concerns about the availability of both Jarvis Landry (ribs, hip) and Odell Beckham, Jr., (illness). …Jacksonville is watching D.J. Chark, who limped off the field last week with an ankle injury. ..Tampa Bay has listed Rob Gronkowski (shoulder), Scotty Miller (hip/groin), Chris Godwin (hamstring) and Mike Evans (ankle) as all questionable for the Packers game.  The Bucs think Godwin can play, but Evans will be a game-time decision. …It looks like Sammy Watkins (hamstring) is going to miss a couple weeks for the Chiefs and Sterling Shepard (toe) might be back in time for next week for the Giants and Diontae Johnson (back) will not play for the Steelers. …The Vikings will be without RB Dalvin Cook (groin) when the host the Falcons. ..Denver’s Melvin Gordon (illness) missed practice Thursday and Friday and is listed as questionable against the Patriots. …Both TE Mo Alie-Cox (knee) and LB Darius Leonard (groin) are doubtful for the Colts game against the Bengals.