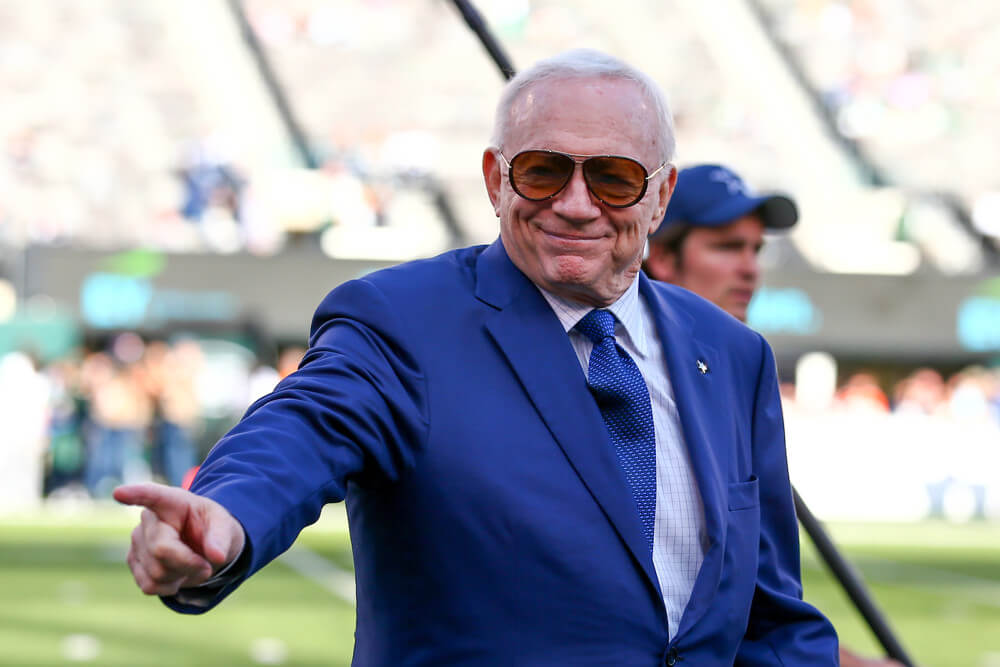 Is Jones’ Kneeling Stance Out Of Step With NFL?

Is Jones’ Kneeling Stance Out Of Step With NFL?

The continued civil unrest taking place in the country has influenced sports leagues to join in protests against the acts of violence and brutality committed by the police in several different cities.  Players within the NFL are planning on kneeling during the National Anthem at football games this season as a way to honor the victims. But Jerry Jones, owner, president and General Manager of the Dallas Cowboys, doesn’t want his team to kneel. And, knowing Jones, he’s unlikely to change his mind. The NFL still doesn’t have a formal comment on Jones’ position.

Jones is committed to the civic importance of singing the national anthem and showing respect, and it is unclear still if the Cowboys will kneel during the anthem in 2020.

Is Jerry Jones Right On Kneeling?

Jones insists on hoping he can persuade his ‘Boys to disregard the silent protest and to not practice their civil right to protest peacefully against social inequality. Since the murder of George Floyd by police and the more-recent attack on Jacob Blake, teams in all leagues have looked for ways to protest the abusive behavior of the police when treating blacks.

The NFL, which clearly emphasizes the recent remarks of Commissioner Roger Goodell to Emmanuel Acho, openly supports the players’ position related to protesting, and states that kneeling during the anthem does not show any kind of disrespect to the military forces, the US flag or the country.

However, Jones, in his mind, is always right, and he continues to treat this situation as something very sensitive when it is not, and he intends to smoothly try to force his players to follow his will.  He insists, though, that he doesn’t plan on trying to make it a direct order.  The NFL is not inclined to stop Jones from his demand.

Jones made a recent comment on The Fan in Dallas, the team’s home radio station, concerning his persuasion to establish a compromise with players that would stop them from kneeling during the anthem, and the NFL informed PFT that it didn’t have anything to say.

The league is treating this topic very carefully; it might turn into a ridiculous, unnecessary argument.  Jones wants players to kneel before the anthem, not during it, which completely strips meaning from the entire message meant to be displayed.

Jones did this with the Cowboys last year, but that was a different time, and things have changed.  The previous actions haven’t brought about change, and players are going to do more now.

Kneeling Is No Longer Taboo

Kneeling during the national anthem has become more widespread in different leagues, and most people support the gesture.   Coincidentally, it is almost four years to the day since former San Francisco quarterback Colin Kaepernick started the action, and the general response today is much more supportive everywhere than it was then.

Jones, like many others, have also neglected to keep in mind that Kaepernick initially protested by sitting on the bench during the anthem rather than kneeling.  However, a former Green Beret convinced him that kneeling was more respectful.

Commissioner Goodell needs to have more authority because his signature is printed on every official NFL football, which means that he must take the initiative to deny Jones’ request and let players exercise their right to protest by kneeling if they wish. Jones is the main boss, but he isn’t going to gain anything by trying to force his will on the Cowboys, especially given the current situation in the US.   The games are played by the players, not the owners, who need to stay silent in the wings.