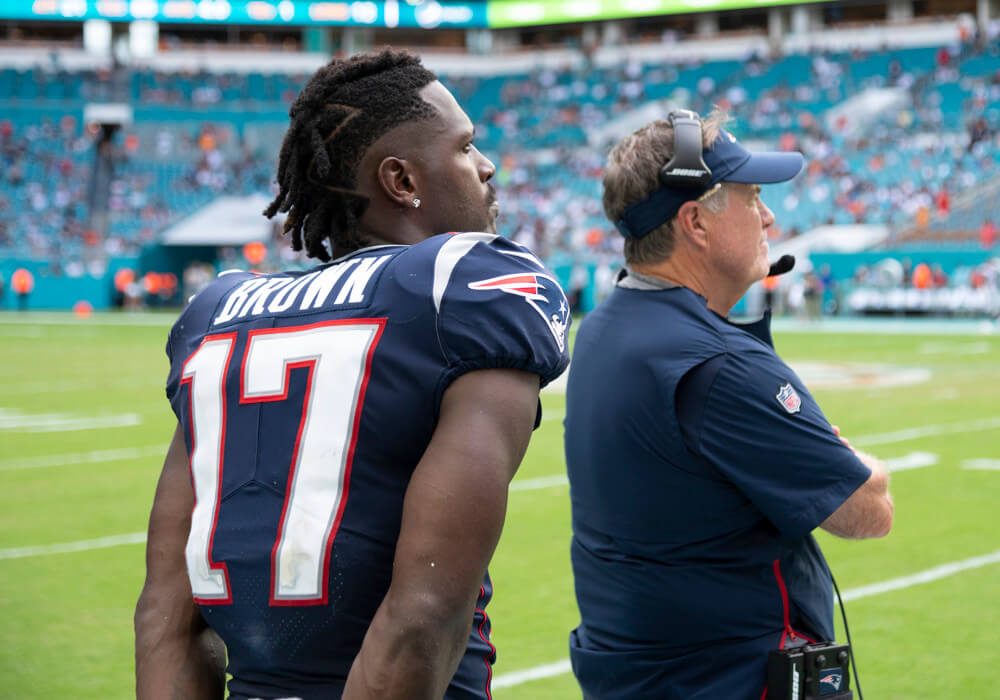 The Patriots thought they could overcome Antonio Brown’s worst baggage. Like the Steelers and Raiders discovered before them, they were very wrong.

After another round of allegations against the wide receiver surfaced Friday morning, the Patriots cut all ties with the All-Pro Friday afternoon.

“We appreciate the hard work of many people over the past 11 days, but we feel that it is best to move in a different direction at this time,” the team said in a statement.

After word got out that Brown had allegedly sexually assaulted a female with whom he had a working relationship, the initial reaction was that his career was done.  Brown is the target of a lawsuit by Britney Taylor, his former personal trainer, who accuses him of assaulting her on three separate occasions.

However, Brown won’t face a criminal investigation over the accusations, as Pennsylvania prosecutors have determined that the statute of limitations has passed.  However, just when he thought he might be able to move on with his life, Brown found himself facing yet another accusation, as well as a lawsuit from a doctor that treated him.  The multimillion-dollar star’s troubles are far from over.

Taylor’s lawsuit alleges that Brown assaulted her three time between 2017 and 2018, one of them including rape.  Through his lawyers, Brown has asserted that Taylor is simply looking to capitalize on his fortune and that any relations between the two were entirely consensual.  The NFL is still conducting its own investigation, as is the Patriots’ front office.  There is no word on when those investigations will be completed.

In the meantime, Brown is having to defend himself against more charges.  A woman whose accusation of sexual harassment was detailed in a story in Sports Illustrated last week alleges she has subsequently received “intimidating” text machines from Brown.  According to the story in SI, Brown is said to have made unwanted sexual advances toward the woman after hiring her to paint a mural of him in his home. According to her version, Brown fired her in retaliation.

This past Wednesday, she reportedly began receiving text messages from Brown after she came forward about the 2017 incident in an interview with Sports Illustrated’s Robert Klemko.  She has shared the messages with sports media outlets such as Sports Illustrated in an effort to provide corroborating evidence and has asked the NFL to investigate the alleged harassment.  Just like with the Taylor accusations, the NFL has already been in contact with the victim and the Pats have said that they are looking into the situation, as well.

To exacerbate the seven-time Pro Bowler’s issues, Brown is also going to have to answer to yet another lawsuit.  This one was submitted by a doctor, Victor Prisk, who treated Brown and accuses him of not making good on his bills.  Not only is he remiss in paying for medical treatment, but Brown reportedly also farted in the doctor’s face.  The alleged gas-passing incidents were caught on video and Prisk wants $11,500 in restitution for his services and extra body cologne.

All of these issues have led Brown to already lose at least one endorsement deal.  Nike has cut ties with the wide receiver, simply stating, “Antonio Brown is not a Nike athlete.”  It didn’t elaborate on the reasons for the decision, but these should be pretty obvious to everyone.

Belichick was apparently getting frustrated with all the air time Brown’s antics are getting.  He was participating in a press conference Friday morning and made it clear from the start that he was there to only talk about Brown and his activity on the field ahead of the team’s game against the New York Jets – his off-field drama was off-limits.

“I know there are questions about Antonio,” Belichick said. “We take all the situations with our team very seriously.  There are some things that we’re looking into, but I’m not going to have any comment on any of the off-the-field situations or questions on that. Anything on football, I’m happy to answer.”

One reporter was either sleeping when Belichick made the cautionary statement, or simply didn’t care, and he decided to bring up Brown’s activity.  The individual asked Belichick how he is able to balance the off-field issues with the game and the coach nonchalantly tried to push the question aside.  The crowd wasn’t having it, though, and continued to exasperate Belichick.  He finally had had enough and cut the press event short, walking off in an impatient huff.

Brown is still, as of now, expected to be in the game against the Jets.  Belichick said that he’s “on the roster,” but that could change if the NFL decides that it’s time for him to take a knee for an extended period of the season, or longer.