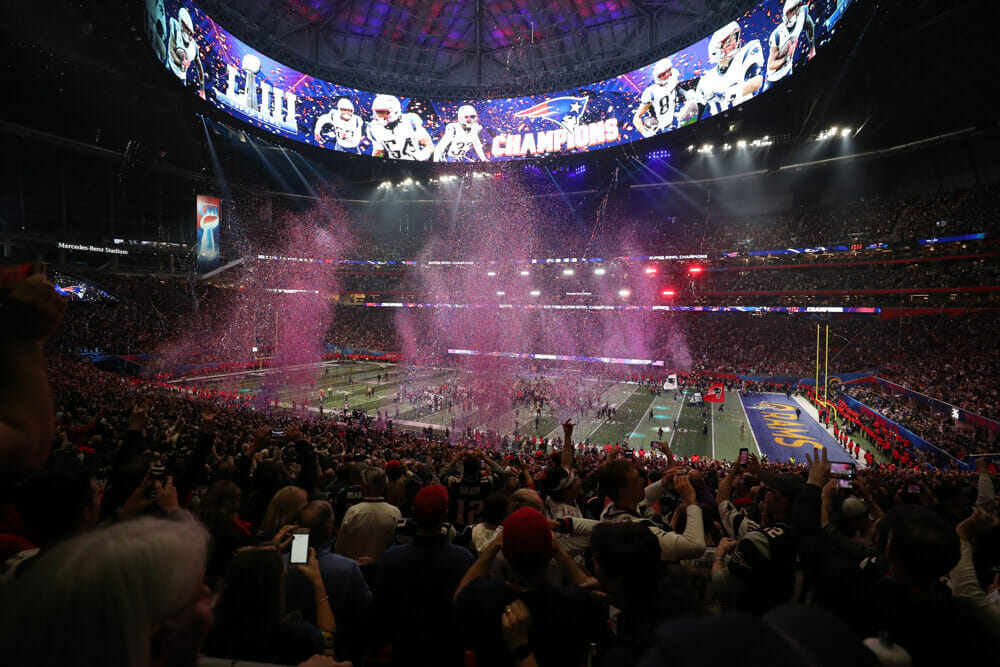 If Dr. Evil were here, he’d be mesmerized by the amount of money that’s being bet on Super Bowl LIV.  Always the biggest sports gambling event in the US, it will undoubtedly receive even more action this year with the expansion of legalized betting across the country.  There have already been a number of huge-money bets placed on the game, and there are plenty more to come, as well.

Sportsbooks have shared some of the information on bets they’ve seen so far on Super Bowl LIV.  With February 2 quickly approaching, there will be more and it wouldn’t be surprising to see several million-dollar (or more) wagers placed.

DraftKings leads the pack so far, recording a $684,000 bet on the San Francisco 49ers, at -2 (-114), to win, with the gambler buying half a point.  That bet was processed yesterday at the operator’s New Jersey-based DraftKings Sportsbook.  It also saw, through its West Virginia operations, another $50,000 placed on the San Fran moneyline at +108.

The Hollywood Casino at Charles Town Races in West Virginia also received a six-figure bet yesterday.  $187,000 was put on the Niners moneyline (+107), which could prove to be lost funds.  If successful, though, the return will have made it worthwhile.

MGM’s sportsbook in Las Vegas saw some action earlier in the week when it received $150,000 on the Kansas City Chiefs moneyline (-125).  With the level of wagers always seen in Sin City, this is only the beginning and sportsbooks are well prepared to handle bets of seven and eight figures.

The Westgate Las Vegas operates a sportsbook that is so big that it had to be given a different name.  The SuperBook is accustomed to serious action, but is still waiting for the big bills to roll in.  Unless it’s holding out, the biggest bet it has received so far was one for $110,000 that the Super Bowl would go over 52.5 points.  This one might be a little tricky.

On a 49ers moneyline (Even) bet, William Hill US saw $100K handed over this past Sunday.  It would be difficult to back this bet with that much money, unless you really have Benjamins to burn.  William Hill was most likely extremely happy to take this wager.

What Does The Data Say?

According to the pooled data on wager so far ahead of the game, most money is being put on the Over.  On Monday, SouthPoint in Las Vegas saw 75 bets on the Over and just one on the Under in the 24 hours after the line and total had been posted.  DraftKings indicates that 90% of the bets, and 96% of the money, has been for the Over, which sat at 54 this morning.

Nevada sportsbooks only began tracking gaming action in 1991 with the NFL Championship game.  Since then, they have reported losses of $174.69 million, of which $2.896 million came from just two games – Super Bowl XXIX and Super Bowl XLII – and have maintained a winning record overall.  According to Nevada gaming regulators, sportsbooks have received $2.55 billion in wagers across the same period.