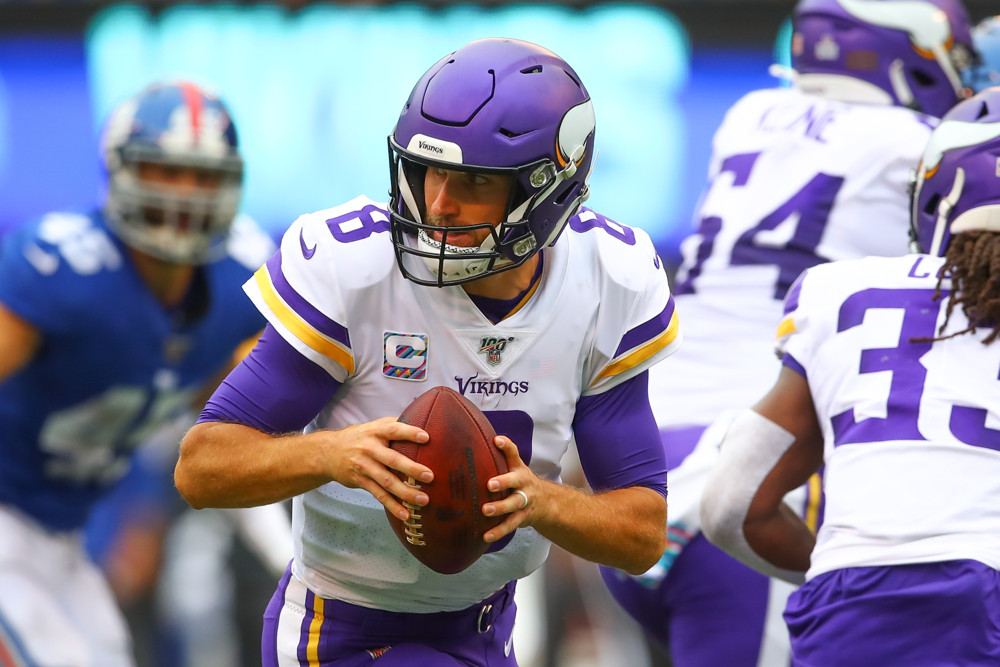 Prop It Up! Ride Cousins, Rodgers Overs In Week 6

Prop It Up! Ride Cousins, Rodgers Overs In Week 6

Week 6 of the NFL season is already here and with it brings a full slate of games to pick some props for.  Let’s dive right in and try to find some betting value on NFL player & team props.

Kirk Cousins OVER 1.5 TD passes (+105)
Coming off a 300-yard performance and a pair of touchdowns against the Giants, Vikings QB Kirk Cousins looks like he might be coming out of his early-season funk.  He now has thrown for 1,041 yards with five touchdowns and two interceptions.  Not the greatest numbers I admit, but I think he sees an uptick in passing attempts moving forward, especially with the Vikings continued success in the win column.  Over the last four weeks, Cousins has seen his peripheral stats on the rise across the board.  His last game saw season-best numbers in Yards (306), TD’s (2), CMP% (81.5), average yards per pass (11.3) and gave up zero interceptions.

Taking a look at the matchup furthers my confidence with the Eagles ranked 23rd in the league in giving up passing touchdowns (1.9tdpg) and 28th in passing yards allowed (271.2ypg).  With Cousins on an upswing and the Eagles continuing to allow opposing QB’s to put up big numbers, I like the plus money odds here and am riding with the hot arm in Philly this weekend.

Aaron Rodgers OVER 300 passing yards vs the Lions (+175)
The Lions have been getting the shaft this season when it comes to facing superstar quarterbacks and Week 6 will be no different.  Despite pulling out a win against the Chiefs and MVP hopeful Patrick Mahomes, I see this week as a regression game and like the Packers and Rodgers to take a big step forward.  He will have to if he wants to eclipse 300 yards this weekend after achieving the feat just once this season so far with a 422-yard performance against the Eagles in Week 2.

The thing about it is, this is the worst defense against the pass that the Packers have played so far this year.  The Lions rank 30th in the NFL for passing yards given up per game (282.7 yds) and 29th ranked in opponent yards per completion (12.1 yds).

If you take the average completions over the last 2 weeks by Rodgers (28) and take the average yards per completion given up by the Lions (12.1 yards) we can make an estimate that Rodgers will throw for 338.8 yards this weekend.  I’m willing to bet on those trends, especially at +175, and will be rooting for the Packers offense this weekend.

Patrick Mahomes OVER 400 yards (+375)
Sure, Mahomes is coming off back to back rough starts.  His two worst starts of his career from a statistical point of view, in fact.  So why would I feel confident in taking him to have his second 400-yard game of the season?  First off, his ankle injury has had another week to heal and he’s stated he is “almost” 100 percent heading into a home game against the Houston Texans.  It’s also worth noting that those two previous “worst games of his career” still saw him total 636 total yards and no interceptions, he just wasn’t able to find the end zone.

And you know what total yards bettors don’t care about? Touchdowns. The Texans rank 25th in opponent passing yards and 27th in games that take place away from Houston.  His last “dud” was against an Indianapolis team who averages 242.0 passing yards allowed per game or 40 more yards per game than the Texans.  And remember, Mahomes still threw for 321 total yards in that game.  His last two games I blame on his ankle injury and this bet is really a bet on the health of that ankle.  After watching practice film and various interviews I feel good about his health heading into Week 6 and will happily take the +375 odds for him to make a statement game after a pair of letdowns.

Pretty much any Redskins player to go over their yards total against the Dolphins
It’s no secret that the Miami Dolphins are this year’s laughing stock team in the NFL.  We don’t need to go into too many details here but they rank second to last in passing yards given up, last in completions AND yards per completion.  Not only can they not defend the pass but are also dead last in rushing yards given up per game along with rushing touchdowns.  You get the point, the Miami Dolphins might have a better shot of fielding actual dolphins on defense than the scrubs they have currently starting.  That being said, the player I like the most to get some action in this game is Miami wide receiver Preston Williams.

Preston Williams OVER 4.5 receptions (+112) & 56.6 receiving yards (-115)
Williams has yet to have his breakout game. Enter the Washington Redskins.  While I’m not sold on his long-term talent, Williams has enough to hit these marks this week.  He has been targeted 20 times over his last two games, so if he can just haul in half of those he should be a lock to cash each of these props.  He is also +240 to score a TD, which is very tempting at the odds, but I’m not willing to pull the trigger on that just yet.