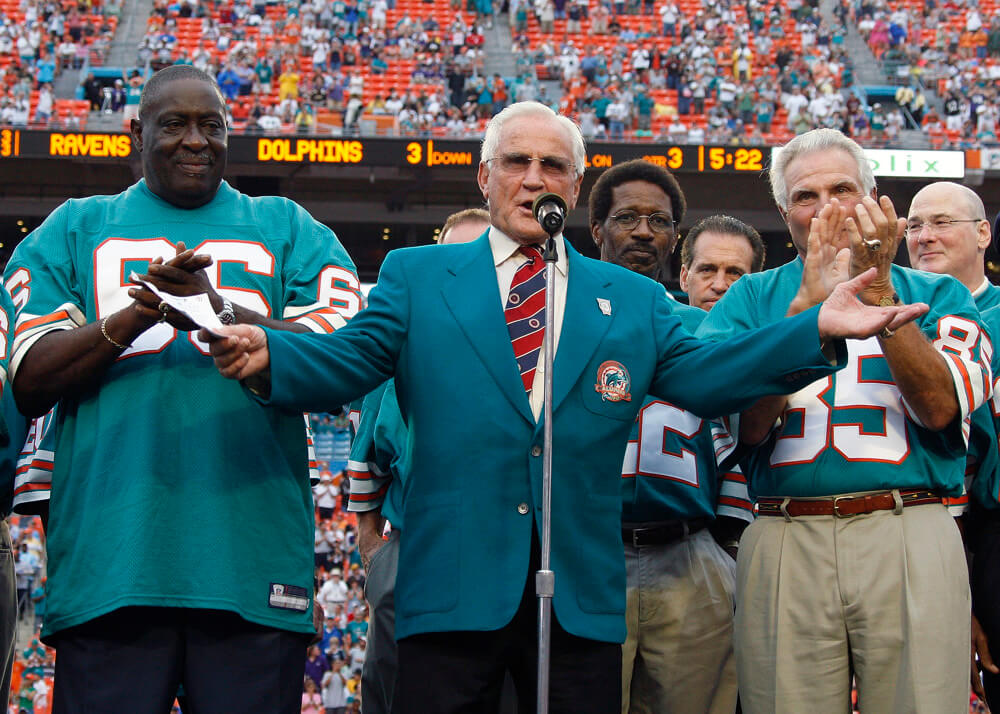 He will always be known as the only man capable of leading an NFL team to an undefeated season.  As the head coach of the Miami Dolphins, Don Shula pulled off the feat in 1972, tacking on a Super Bowl win to an already impressive 17-0 season.   The Hall of Famer would go on to take the Dolphins to another Super Bowl title the following year, and retired as the team’s head coach in 1995.

In addition to recording the perfect season, Don Shula would become known as the winningest coach in the history of the NFL, and his legacy will never be forgotten.  At 90 years old, Shula passed away this morning of natural causes.

Don Shula – Rise Of A Legend

Shula played football growing up, standing out from the rest early on.  While playing as a halfback at Thomas W. Harvey High School in Painesville, OH, he took the team to its first winning record in 18 years.  He continued impressing the football community as he moved through college, and was drafted by the Cleveland Browns in the ninth round of the 1951 draft.  As he progressed in football, so did the game itself, first with the merger between the AFL and the NFL and later with changes in season play.

Shula would play for seven years before moving on to become a coach with the Detroit Lions in 1960.  He was the team’s defensive coordinator for two years, switching to the Baltimore Colts as the team’s head coach in 1963.  Six years later, he was convinced to take the reins of the Miami Dolphins, and football would never be the same.

In addition to becoming the NFL’s most formidable coach, with a total of 347 wins as a head coach, Don Shula was recognized four times as the AP NFL Coach of the Year.  Sports Illustrated named him the Sportsman of the Year (the only pro coach to ever have received the honor), and he is part of the NFL’s 100th Anniversary All-Time Team, as well as its 1970s All-Decade Team.

He was honored with the “Lombardi Award of Excellence” in 1999 and, in 2011, the Ellis Island Medal of Honor.  He completed 33 seasons as an NFL head coach, grabbing five AFC Championships and the two Lombardi Trophies with the Dolphins during his 26-year tenure with the team.

Shula spanned generations of football greatness. He coached Johnny Unitas at the end of his career and Dam Marino at its start. In between he coached such stars as John Mackey, Nick Buoniconti, Larry Czonka, Paul Warfield, Bob Griese, Mark Duper and A.J. Duhe.

Gone, But Not Forgotten

The Dolphins issued a statement today after the news of Shula’s passing broke.  The team said, “Don Shula was the patriarch of the Miami Dolphins for 50 years. He brought the winning edge to our franchise and put the Dolphins and the city of Miami in the national sports scene.  Our deepest thoughts and prayers go out to Mary Anne along with his children, Dave, Donna, Sharon, Anne and Mike.”

NFL Commissioner Roger Goodell chimed in, as well, calling Shula “one of the greatest coaches” in the history of football.  The Pro Football Hall of Fame went even further, stating, “The Game has lost one of the greats today, but we have all lost a truly incredible man.”

Shula impacted the lives of many people, both on and off the field.  His name appears on the Don Shula Foundation for Breast Cancer Research, which was founded in 1991 after his wife, Dorothy, died of breast cancer that year.  Two of his children, Mike and Dave, would go onto become NFL successes in their own rights.  His three other children, daughters Donna, Sharon and Anne, didn’t follow in his footsteps.

As far as coaches go, Don Shula had it all.  He was intense, yet knew how to relax around the team.  He was insightful and pragmatic, but could remain flexible to meet the individual talents of the players.  Shula was the epitome of football dedication and worked hard from the very beginning to achieve success.  When considering all athletes, Shula can definitely be considered the GOAT.