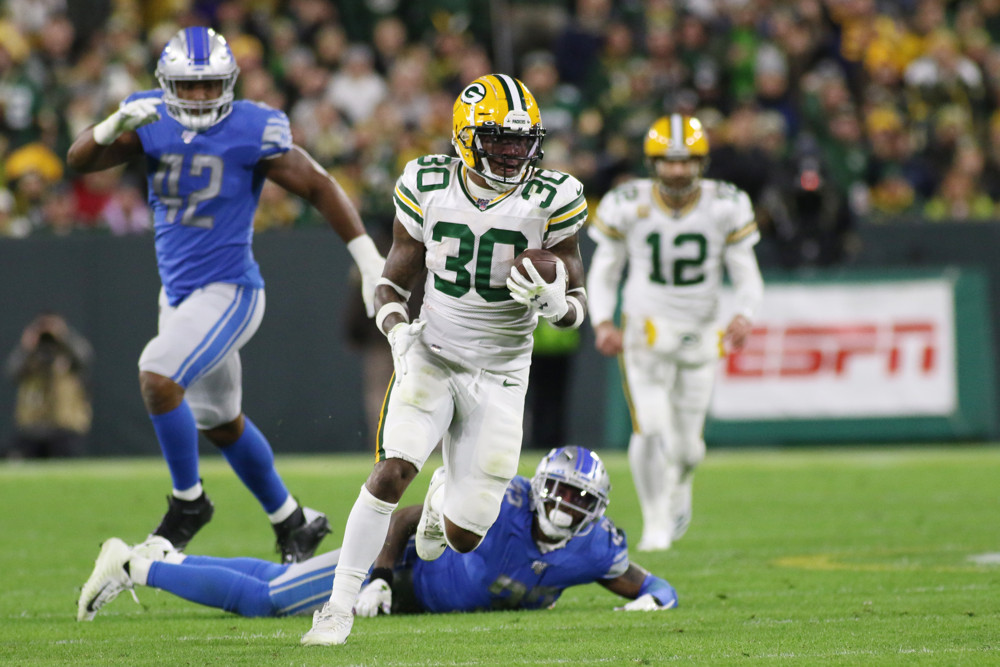 The NFL season is finally settling in and calming down on the injury front. But that doesn’t mean that the waiver wire isn’t any less stocked with widely-available players who could make big impacts now that they are thrust into unlikely starting roles. Let’s look at the new landscape on the waiver wire for Week 7:

The Carolina quarterback has all but wrested the starting job on a permanent basis from Cam Newton, and his play against the Buccaneers on Sunday did nothing to alter that narrative. Allen completed 20 of 32 passes for 227 yards and two touchdowns without any turnovers, the kind of effective game-managing performance that wins games. It also wins fantasy weeks in leagues that award six points for passing touchdowns. He’s as safe a waiver option as there is.

What an entrance. It was the Cowboys who were left feeling run down and sick after Darnold led the Jets to their first win of the season, throwing for 338 yards and two touchdowns. He was the punchline for many weeks because of mono, but don’t forget he is a franchise QB in the making and he has the weapons to make that happen. Get him now, because he won’t be available for long.

The Redskins are dreadful, but when Keenum is healthy, he’s been a pretty solid fantasy quarterback this season. With rookie Terry McLaurin developing into a big-time receiver with each passing week, Keenum has thrown multiple touchdowns in all four of the games he played beginning-to-end. It’s ugly to watch his team, but he’s averaging 22 fantasy points per game in those four complete games. Not too shabby.

Williams was coming on strong two weeks ago when he was felled by a concussion. He returned Monday night and picked up right where he left off, rushing for 104 yards on 14 carries and posting a 4-32-1 in the passing game. Clearly he is going to have a major role for the Packers the rest of the way, even with Aaron Jones present. If you cut him, get him back.

Edmonds looked poised for a big day when it appeared David Johnson might not play. Well, DJ did play, but guess what? Edmonds still had a big day, combining for 67 yards and a touchdown. It was his second straight double-digit fantasy outing, and if Johnson ever did miss a game, Edmonds would be the main man in Arizona. He’s worth a stash.

As long as Jaylen Samuels is sidelined, Snell is going to have a role in this offense. The Steelers are desperate to hide Delvin Hodges (and Mason Rudolph when he returns) and James Conner can’t run the ball on every down, so Snell is going to get carries and targets. When the Steelers return off their bye in Week 8, it’s against the pitiful Dolphins. Snell, who had 17 rushes on Sunday, could go wild in that one.

Both of these guys were casualties of the Sam Darnold mono fiasco, but that’s over now, and both we huge factors in the Jets’ victory over Dallas on Sunday. Chris Herndon’s return at tight end might complicate things a little bit for Anderson and Crowder, but not enough to limit their immense upside. Grab Crowder in PPR leagues and Anderson across the board.

That’s two solid weeks in a row for the Bengals rookie in place of the injured John Ross and he should continue to be a factor in the Bengals’ passing attack for weeks to come. Tate has been targeted 34 times over the past four games and has scored double-digit fantasy points in three of them. He is a legit player now.

Well then. With Packers receivers dropping like flies on Monday night, Lazard was pressed into service and shocked the world (and the Lions) by catching 4 of 5 targets for 65 yards and a touchdown in the comeback victory. If Davante Adams and Geronimo Allison remain out for the Packers, Lazard is going to have a big role going forward. He’s earned Aaron Rodgers’ trust, and that makes all the difference in Green Bay.

Seals-Jones is carving out a nice niche for himself in Cleveland, where the tight end was always supposed to be a prime option for Baker Mayfield. With David Njoku injured, Seals-Jones has seized the opportunity, scoring touchdowns in 2 of his past 3 games. He’s a boom-or-bust play, but when he booms, it’s usually big.

Brate was once a top fantasy tight end with the Bucs, but has seen his role diminished with O.J. Howard on the scene. But Howard has been a disappointment this season and Brate is re-emerging as a touchdown threat, scoring in 2 of the past three 3 games. He’s not a sexy option, but he has TD equity with Jameis Winston.

He’s not the name that comes to mind in the Texans’ passing game, but Fells has been in double-digits in fantasy points in 3 of his past 4 games and has had at least six targets in two of them. With all the attention paid to DeAndre Hopkins and Will Fuller, Fells is taking advantage of good matchups and the results speak for themselves.

NFL Week 6: How About Those Cowboys?
NFL Concussion Problem Only Getting Worse
Get Free Picks & Exclusive Offers