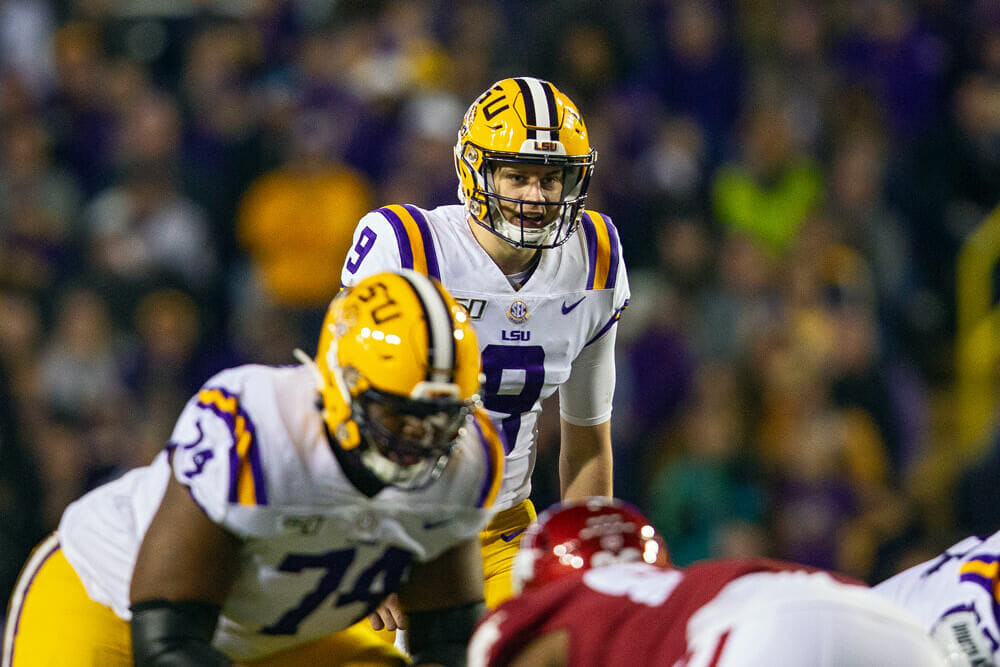 Tomorrow begins a new chapter in the life of the NFL.  With the NFL Draft set to get underway, provided there aren’t any glitches, teams and football fans are getting ready for a lot of excitement that will, hopefully, not be delayed by the coronavirus pandemic.

The nuances of the draft have been complicated by the forced quarantines that are requiring teams to hold the biggest conference call in NFL history, but everyone hopes that the bugs have already been worked out.  Tomorrow will be the big test as the picks start to roll out.

Joe Burrow, the star quarterback of LSU who lead the team to an NCAA National Championship and picked up the Heisman Trophy along the way, is set to be the first player drafted tomorrow.  Given its lackluster performance, the Cincinnati Bengals have been given first pick in the draft, and the team is going to take Burrow.

However, it isn’t necessarily because they think he will be able to singlehandedly score a Super Bowl appearance for the team.  While that would be nice, the Bengals also know that he has significant value, and could look to trade him somewhere else in exchange for a hefty price tag.

Defensive end Chase Young is coming out of Ohio State, ready to leave his mark on the NFL like he did at his school.  He is skipping his senior year to make it as a pro, and he has all the skills necessary to pull it off.  Somewhat of a diva (he showed up for the combine, but didn’t want to waste his time being a “combine athlete), Young’s performance speaks for itself.  He’s going to go second in the draft and is headed to the Washington Redskins, with whom he has already had “very productive” conversations.

Anything But Slim Pickings In The Top 10

The Detroit Lions will be picking next, and there’s a good chance they have their sights set on defensive tackle Derrick Brown.  They need some help on defense, and Brown stood out with Auburn.  The unanimous All-American and All-SEC First Team player was a force to be reckoned with as a freshman, and only improved from there.  He’s not the quickest player on the field, but his 6’5”, 318-pound frame gives him an advantage.  Several teams have shown interest in him, but the Lions are the ones to score the win.

The first offensive tackle to be selected in the draft will be Tristan Wirfs out of Iowa.  The New York Giants will scoop him up after having spent a considerable amount of time watching his performances.  As was the case with Young, he’s not waiting to finish college before jumping into the NFL, having announced his plan to participate in the draft ahead of what would have been his senior year.  An all-around athlete, he has titles in wrestling and track-and-field events to add to his football trophies and accolades, and will be an incredible asset for the Giants.

The race to be the first quarterback drafted into the NFL was neck-and-neck between Burrow and Tua Tagovailoa.  Burrow won for obvious reasons, but Tagovailoa can’t be too disappointed.  The former Alabama star is going to be an even bigger name in the NFL and will give the Miami Dolphins the talent they desperately need when they pick him up in the draft.

The Dolphins have a total of 14 picks available to them, and using one for Tagovailoa will bring considerable value to the team that finished last in the league last season.

The Carolina Panthers need all the help they can get this year.  They finally realized that Cam Newton’s talent left the quarterback before his last season with the team and are diligently working at rebuilding both the offense and defense.  To help them out, linebacker Isaiah Simmons could be their first pick in the draft.  He excelled at the position with Clemson, but has also worked as a linebacker, defensive end, safety and cornerback.

Given that versatility, and the fact that Carolina has a limited number of picks, selecting Simmons would be a smart choice.