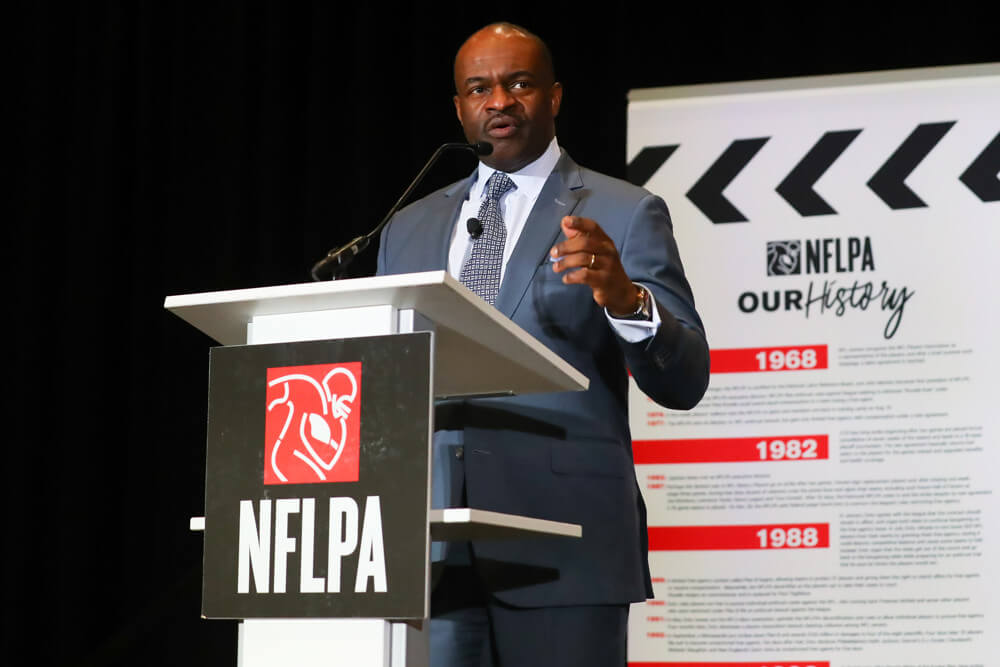 It appears that the debate over whether or not there will be an NFL season this year, or whether there will be a delay, isn’t ready to come to an end.  The league wants it, the players want it and the fans most definitely want it.  However, depending on who is asked, there are those inside the massive organization who would bet everything they own that the regular season will kick off in September, but there are also others who aren’t as convinced.

Unfortunately for football, those “others” could have the last word.

In One Corner, NFL Owners

On one side of the debate sits a number of people – mostly team owners – who are confident that everything is going to move forward as if the coronavirus was nothing more than a mosquito bite.  One of these is the owner of the New England Patriots, Robert Kraft, who wants to see if his team has any skill now that Tom Brady has shipped himself off to the Tampa Bay Buccaneers.  If you ask Kraft, he’ll say that nothing is going to stand in the way of football.

Speaking to Sean Hannity of FOX News, Kraft asserted, “We’re preparing to hopefully play football this fall.  We’re working hand-in-hand with our union. We believe we’re developing protocols that allow us to do it in a safe way looking out first for our players and our personnel and then, of course, the fans.  I believe we can do it.”

The owner of the Miami Dolphins, Stephen Ross, is even more confident than Kraft.  He fully expects to see the season stick to its schedule, and goes a step forward.  Ross predicts that the games will be held in front of actual fans – not robots or cardboard cutouts.

The plan is still for training camps to get going in July, followed by preseason games in August.  Delays to either of those two will force the NFL regular season to be shifted and, should COVID-19 make a rebound as some have predicted, everything the league has worked for until now to get players back on the field will have been for nothing.  However, Kraft and Ross, as well as NFL Commissioner Roger Goodell, are hell-bent on doing whatever it takes to see the season get started on time.

In The Other Corner, The NFLPA

The NFL Players Association (NFLPA) isn’t ready to show the same level of confidence as some others.  The executive director of the players’ union, DeMaurice Smith, spent some time participating in an interview with Bryant Gumbel on HBO’s Real Sports, where is wasn’t afraid to let his true feelings be known.  Smith believes there’s a chance – although not a significant one – that the season may wind up being canceled.

Smith was asked to rate, on a scale of one to ten, what his level of confidence is that the 2020 season will take place.  His response indicates some hesitation, “Look, a lot depends on what happens with the other sports, and to say that we aren’t looking at what’s going to be happening in basketball and baseball — and we’re not looking at how they work through these things — I’d be lying to you if we’re not.  So how about if I go with six, seven on a curve?”

That doesn’t instill a lot of confidence in fans, and makes people wonder what Smith knows that the rest of the world doesn’t.  There are definitely some questions that still have to be answered before players can be unleashed on the gridiron, but, if the NBA and MLB can get going, NFL football fans would like to think that their favorite sport won’t be left out and have a delay.

The Referee Of The NFL Delay Dispute Is Public Health

Everything hinges on whether or not the pandemic is brought under control enough to allow games to take place.  Goodell made this clear when he released the season schedule, explaining, “In preparing to play the season as scheduled, we will continue to make our decisions based on the latest medical and public health advice, in compliance with government regulations, and with appropriate safety protocols to protect the health of our fans, players, club and league personnel, and our communities.  We will be prepared to make adjustments as necessary, as we have during this offseason in safely and efficiently conducting key activities such as free agency, the virtual draft off-season program, and the 2020 NFL Draft.”

There’s still a good chance that the NFL will be able to realize a normal schedule rather than have a delay, and fans are certainly getting behind the effort.  At this point, the only option is to take things day by day until a final determination can be made.