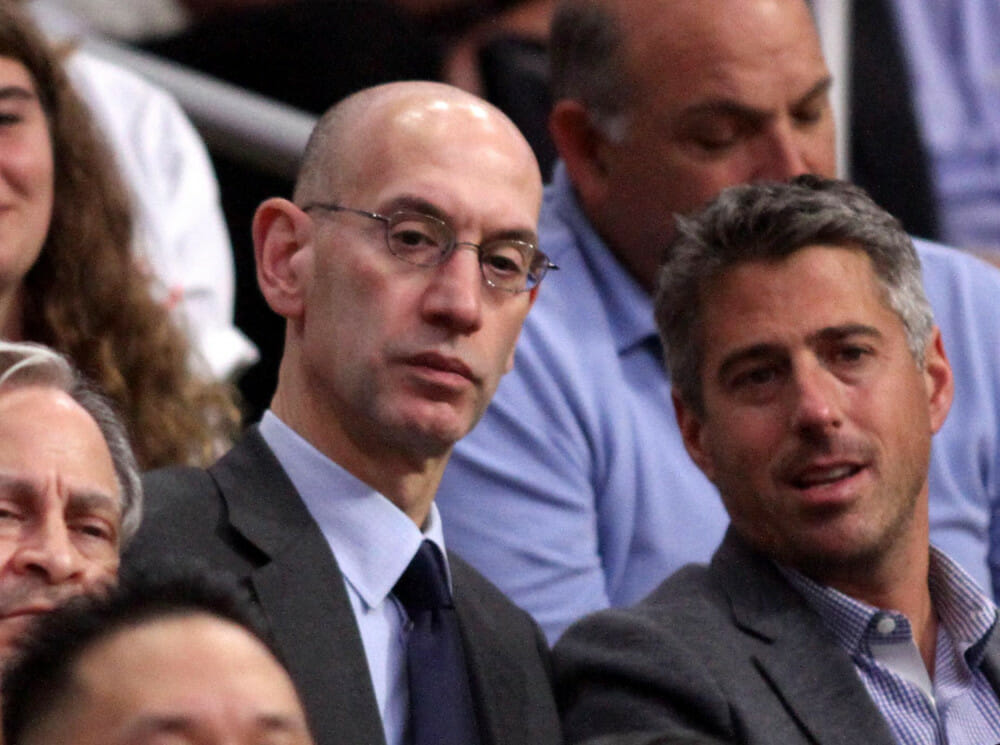 NBA To Keep CBA In Place During COVID-19 Pandemic

NBA To Keep CBA In Place During COVID-19 Pandemic

While team owners and players disagree on what type of compensation should be given during the continued shutout of games, at least the NBA and the National Basketball Players Association (NBPA) have been able to agree to something.  The NBA and NBPA have decided to keep the current collective bargaining agreement (CBA) in place until September, instead of the 60-day window that went into effect as of March 11 when the coronavirus forced the league to suspend the season.

With so many unknowns still needing answers, the agreement is a satisfactory alternative while the sports world waits to see what happens next.

According to the way the current NBA CBA is written, a force majeure event – such as a global pandemic or other major catastrophe that causes the league to stop – could give the league the option to essentially scrap the entire league.  When the season came to a screeching halt on March 11, the force majeure clause of the contract was triggered, but the new agreement will help maintain some semblance of order until the future of basketball becomes clearer.

Last Friday, NBA Commissioner Adam Silver had a call with members of the NBPA, outlining a gloomy financial picture for the league as a result of COVID-19.  Teams aren’t seeing the revenue they expected and even the venues are on the verge of collapse, losing not only athletic competitions, but all the concerts and other activities that they would normally host.

During the call, Silver reportedly said, according to ESPN, “This CBA was not built for an extended pandemic.  There’s not a mechanism in it that works to properly accept a cap when you’ve got so much uncertainty; when our revenue could be $10 billion or it could be $6 billion. Or less.”

Facing such a depressing situation, and with no one wanting to suffer any more than is absolutely necessary, the only resolution was to try to work out a resolution that will make everyone happy.  The current CBA doesn’t expire until the end of the 2023-24 season, although it contains an opt-out clause that can be mutually implemented prior to the season, and both sides will now figure out how to make changes that can be beneficial to everyone involved.

Some of these CBA changes could be tied to salary caps and tax thresholds, but the NBA and the NBPA will dissect every aspect of league operations to find the best targets to keep for reductions in spending.

A Little Breathing Room For Negotiations

With the extension of the force majeure clause, it’s time for the league to sit down at the virtual table (since getting together physically is still impossible) and figure out how best to salvage the season that was coming into its final leg when the coronavirus pandemic hit.

The league and players need to figure out how many regular-season games should be played, how playoffs should be handled and how to recuperate any money lost during the suspension.  The latter is a virtual impossibility, given the massive amount of revenue that has already been forced off the books.

Silver added on the call, “Our whole system right now in setting a cap to the next season is based potentially off the prior season — and then a projection off the prior season.  And we’re looking at a scenario where potentially we would be playing without fans next year. … Roughly 40% of our revenue is generated from … selling tickets … the suites … the activities that happen in the arena.”

The NBA Draft Hangs In the Air

The NBA Draft was expected to take place on June 25, but that idea has already been scrapped.  There’s still no alternative date, since the draft follows the NBA Finals and there’s no telling when, and if, any type of championship games will take place.  Given the language regarding salary caps in the CBA, and the fact that the league is hemorrhaging money, when and if action resumes will play a huge role in the draft’s activity, as well as what rookies can expect to make as they enter the big league.

Perhaps there’s an easier solution, even if it isn’t ideal.  Throw in the towel on the season and start the next season on its normal schedule.  This is what Shaquille O’Neal would do if he were in charge, and it’s not a terrible idea.  The four-time NBA champ told USA Today, “I think we should scrap the season. Everybody go home, get healthy, come back next year. Just scrap the season. Just scrap it.  To try and come back now and do a rush play-offs as a player?

“Any team that win this year, there’s an asterisk. They’re not going to get the respect.  What if a team that’s not really in the mix of things all of a sudden wins with a new play-off format? Nobody is going to respect that. So, scrap it. Worry about the safety of the fans and the people. Come back next year.”

The coronavirus has caused an abnormal situation around the world.  It would be impossible to try to resolve it with anything other than an abnormal solution.  Perhaps O’Neal is on the right track.