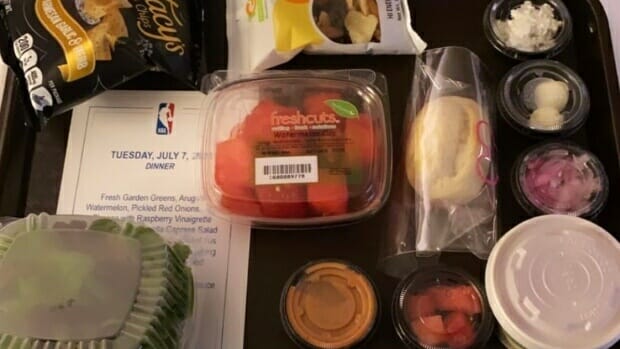 Nowadays, people love food no matter where it comes from as long as it tastes delicious.  A photograph of food served to NBA players at Disney World in Orlando in the NBA Bubble went viral on social media and it made many basketball fans – as well as players – post comments and share their opinions about this “exquisite” cuisine.

These fans are likely to support their NBA heroes under many circumstances, even if it is something not so serious.

People who posted their remarks on social media were really creative and had a great deal of imagination.  Strange comments were made because of the food served to NBA players in Orlando.  People compared the food to airplane food which sounds hilarious, the disastrous Fyre Festival, and finally lunch that is served in a school cafeteria.

Undoubtedly, this time fans and followers came up with funny remarks and most likely they were trying to have some fun amid the tremendous impact caused by the COVID-19 pandemic.  Troy Daniels of Denver Nuggets was the first one to publish a comment about the lack of substance in his dinner inside the NBA Bubble and this caused a bunch of jokes and off-the-wall comparisons.

Another NBA player said that he had the same meal when he was in Middle School, and he shared an amazing picture of the grub served – complete with a salad, fruit, a sandwich and some chips.

Other comments were made that left a bad taste in the viewer’s mouth.  For instance, there was one that said that LeBron James would not eat such food because it looked like airplane food.  Maybe NBA star Isaiah Thomas meant that LeBron is picky with meals and his appetite does not welcome all that is offered.

The NBA’s 2020 season restart is a reality and players are staying in a bubble in Orlando where it is expected the members will be safe from the COVID-19 threats and limit the spread of the disease.  In fact, NBA players are making a big sacrifice.  They are doing this for the sake of love and for the respect for the enormous basketball fanbase and industry that each year produces hundreds of millions of dollars in revenue.

However, some complained at the bad look of the meals being served to the players.  This is serious, not a joke as others have taken it.  According to some fans, the multi-billion company in charge of the food is not doing a good job when it comes to feeding the NBA players at a time when feeding stomachs means feeding motivation and positive vibes, as well.  Players want to know when they can get their double bacon cheeseburgers, fries and large milkshakes.

The Proof’s In The Pudding

According to sports reporter Marc Stein, there’s a light at the end of the tunnel.  He explained on Twitter, “Food in the NBA bubble changes after quarantines are completed.  Player meals won’t look like airline trays after the first 48 hours…”  Players are hoping he’s right, or there could be massive food fights.

It is understandable that some criticize how greedy some top ambitious companies can turn when it comes to the safety of its personnel.  Even though NBA players receive a high-paid salary, that does not compensate the risks they are facing right now.  The virus is still out there, and it is affecting thousands of Americans every day at a terrifying rate.  The coronavirus is not going to end soon; chances are that it has a long way to go, maybe until the end of the year.