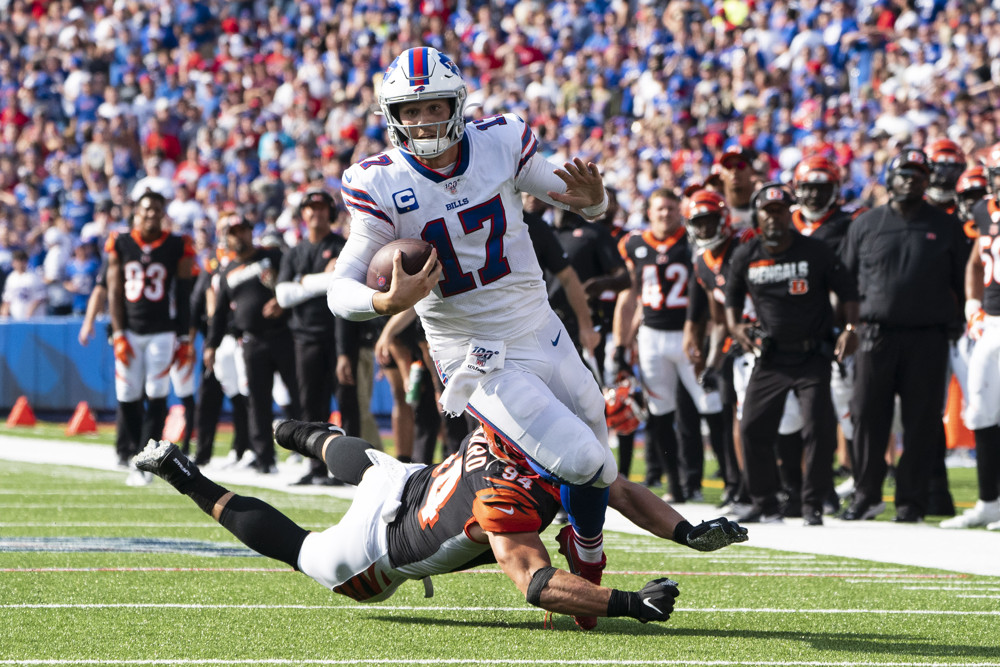 After the Philadelphia Eagles scored a surprise win against the Green Bay Packers Thursday, this Sunday could see more shockers on the NFL gridiron.  There are a couple of key matchups in store and a few more surprises are not beyond the realm of possibility.  Get ready for another fun-filled day of action.

The 3-0 Kansas City Chiefs are traveling to Detroit to take on the Lions.  The Lions have had a decent start, winning two and tying in one, but Chiefs quarterback Patrick Mahomes has been on fire.  Expect the Lions to put up a strong fight, but, in the end, the Chiefs are more than likely going to keep their perfect record going at least one more game.

Two 3-0 teams are meeting this Sunday, as the Buffalo Bills will host the New England Patriots.  If the Bills want to excel, quarterback Josh Allen will need to step up and control the ball a little better. He has the ability to move and make snap decisions on the field, but some of those decisions have been costly.  The Patriots have a solid defense and this is going to force Allen to improvise.  If he isn’t prepared, things could fall apart.  The chances of the Pats taking another victory are fairly good, but the Bills definitely have a fighting chance.

The Carolina Panthers are off to Houston to meet the Texans and, despite quarterback Kyle Allen stepping up and doing a better job than Cam Newton, the contest might prove to be too tough for the Panthers.  The Texans have managed to keep rushes to less than 100 yards a game since Week 17 of the 2017 season, and this means trouble for Christian McCaffrey.  The 2-1 Texans are almost a lock against the 1-2 Panthers, unless Allen gets the coverage he needs and can pull off another four-touchdown game.

Despite being 3-0, the LA Rams haven’t had the strongest offense this season and they know it.  They’ve been working on making some improvements and the results of the training will be seen on Sunday when they host the 1-2 Buccaneers.  The Bucs quarterback, Jameis Winston, currently leads the NFL on the season with ten completions when there’s less than a yard of separation and his squad might just be able to surprise everyone.

The Seattle Seahawks (2-1) will be in Arizona to butt heads with the Cardinals (0-2-1), and their defense is going to prove to be strong against the home team.  Expect a tight contest, but don’t expect anything out of the ordinary.  Cardinals quarterback Kyler Murray will most likely continue to get sacked, thanks to a front line that has allowed a few gaps, and this could be what brings the Cards down.

The defenses of the Minnesota Vikings and Chicago Bears – both 2-1 – will almost certainly set the pace when Minnesota heads into Chicago.  The Bears have one definite strong suit, the ability to stop the run.  They have allowed just a single 100-yard rusher in their last 37 regular-season games.

The 2-1 New Orleans Saints will look to wrap up the 3-0 Dallas Cowboys in Who Dat country on Sunday, even though they don’t have quarterback Drew Brees.  The star is out recovering from surgery on his thumb and Teddy Bridgewater has already shown that he is able to step in and carry the torch.  Brees could be on the sidelines to provide some additional motivation, but it might not be sufficient to see the Saints take the win.

The New York Giants haven’t gotten off to a good start this year, currently down 1-2.  They will more than likely get a boost when they host the Washington Redskins, in spite of the ‘Skins defense, and the game will probably be tight.  When the clock expires, however, the 0-3 Redskins might be hanging their heads once again.

The Indianapolis Colts are ready to receive the Oakland Raiders and the jury is still out on how the matchup will develop.  The Raiders may be 1-2, but their toughness is going to allow them to bounce back against the 2-1 Colts.  If Raiders rookie running back Josh Jacobs can find his zone, the team could even its record for the season.

There are several other contests that are just on the fringe of excitement.  Both the Tennessee Titans and the Atlanta Falcons are 1-2 on the season, and each is hoping that they can bring enough stamina to find the win.  The Pittsburgh Steeler and the Cincinnati Bengals are both 0-3 and are scratching their heads as they try to figure out where the mojo went.  The Miami Dolphins joins them in the 0-3 club and hosting the 1-2 LA Chargers probably won’t help them locate theirs, either.