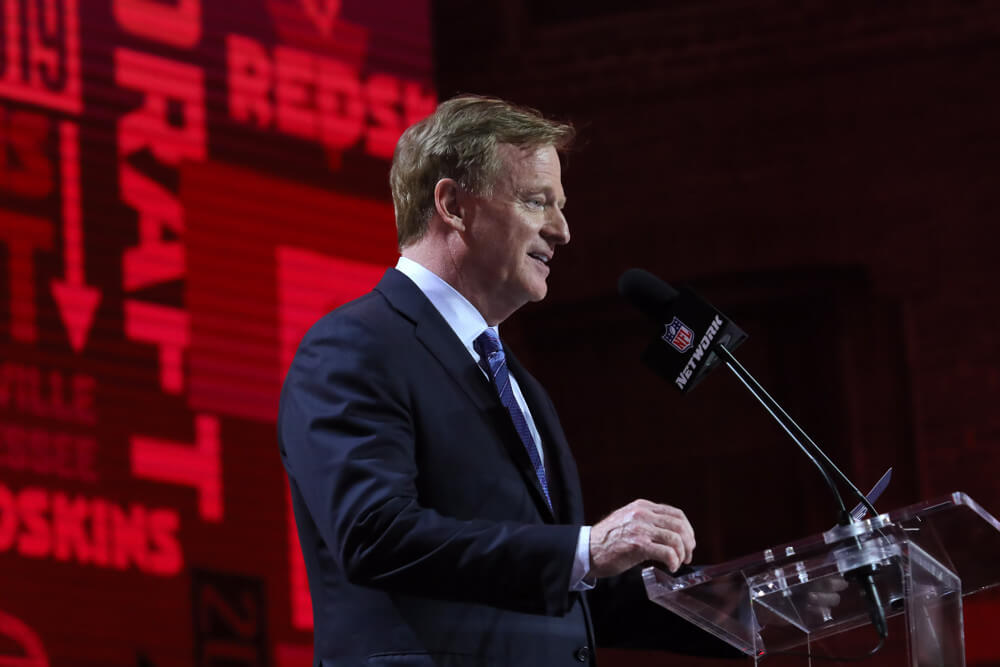 Roger Goodell isn’t set to pack up his things and give up his position as NFL Commissioner for another three years, but this apparently hasn’t stopped the league’s decision-makers from starting to think about his future replacement.  The talks may not have reached the level of seeing candidates submit their resumes, but it seems the NFL is ready to bring in major changes at the top of the ranks as soon as Goodell’s tenure comes to an end.

While there is still a lot of work to be done and more candidates will undoubtedly be reviewed, there may already be a replacement being groomed to take over the league.

The NFL has been on a roller coaster under Goodell, although he certainly can’t be blamed personally for most of the issues.  Since taking over from Paul Tagliabue in September 2006, Goodell has had to steer a ship that dealt with “Spygate,” the players’ lockout of 2011, the referees’ lockout the following year, several major domestic violence scandals, Bountygate, Deflategate and a still-ongoing concussion lawsuit.  As if that weren’t enough, there is also the National Anthem protests started by Colin Kaepernick three years ago.

Despite the turmoil, Goodell has still helped turn the NFL into a multibillion-dollar moneymaking machine.  New lucrative advertising and sponsorship deals have allowed the league to become valued at over $91 billion, with each franchise being worth an average of $2.86 billion.  This is an 11% over what was seen last year, and the current commissioner can be thanked for being a major reason for the increase to have been possible.  In 2018, the league generated over $16 billion in revenue.

That financial boost, to some, heavily outweighs all the negative publicity the league has received over the past 14 years.  However, Goodell is now in a position to solidify his legacy amid nationwide riots and protests that have crippled public opinion on racial equity.  The commissioner can make a statement by embracing racial equity unlike anytime in history, and this would be how history would remember him.

Goodell is in a position to make sweeping changes designed to alter the perception of player discrimination in NFL football, and set the stage for what’s coming next.  There is one individual who stands out as the top contender to take over for Goodell in 2023, and his ethnic origins are aligned to those of George Floyd, the black man who was reportedly killed by a white cop in Minnesota.  Previous rumors, started by The Athletic’s Daniel Kaplan almost a year ago, have Kevin Warren as the most likely person to follow Goodell.

The NFL Is Ready For Change

Warren is currently the commissioner of the Big Ten and has succeeded at making the college football conference a larger blip on the radar in the short 12 months he has held the position.  He previously served as the chief operating officer of the Minnesota Vikings and in both of these positions he has become the first black individual ever to hold the titles.

Goodell can now set the stage by introducing changes to the NFL that would indicate stronger support for racial equity and weaken any perception of discrimination.  He has already taken small steps in that direction by walking back comments on Colin Kaepernick and supporting players’ messages of equality, but the commissioner, with all the power he wields, has the ability to do much more.

That would establish a strong platform upon which Warren could then rise, further implementing changes that might, in some small way, make situations like those currently seen as a result of Floyd’s death something that only appears as a dark entry in the history books.