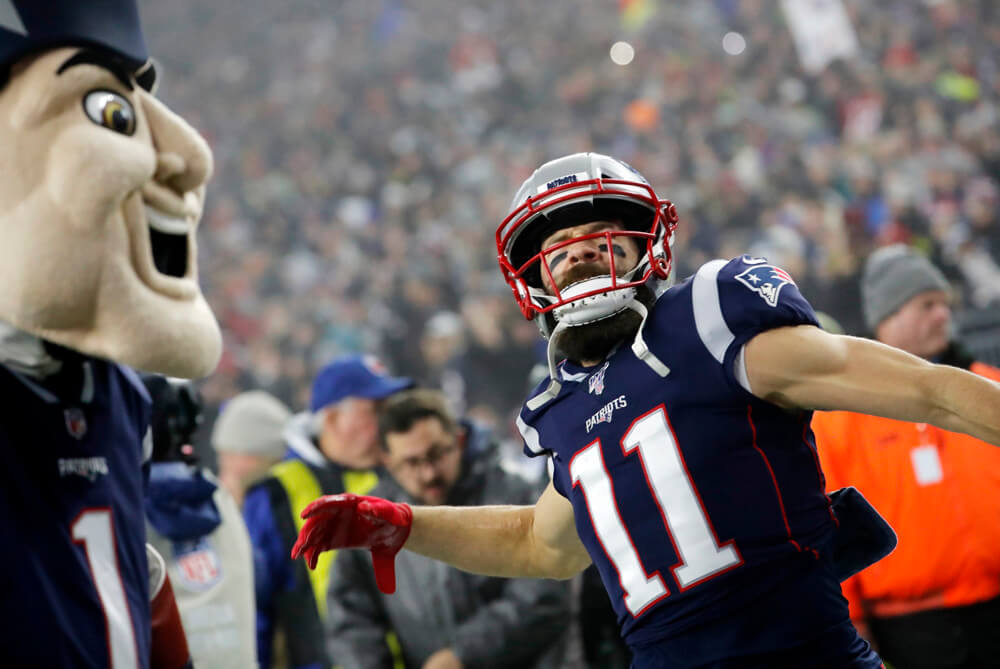 Jumpin’ Julian Edelman! It’s On To Court For Patriots’ WR

Jumpin’ Julian Edelman! It’s On To Court For Patriots’ WR

Julian Edelman, the star wide receiver of the New England Patriots, is taking the recent loss against the Tennessee Titans on January 4 in stride.  He’s using the extra downtime to further his recuperation for shoulder and knee problems, but can’t seem to separate himself from the football field, even when he’s out cajoling with his friends.

Edelman, who was also the MVP of Super Bowl LII, apparently had an off-field flashback to his turf time this past Saturday, mistaking someone’s Mercedes-Benz for a defensive tackle.

During a night out on the town Saturday, Edelman was reportedly with some friends, including former Pats teammate Danny Amendola of the Detroit Lions and retired Celtics star and NBA analyst Paul Pierce, when things got a little out of control.

The details are still a little sketchy, but, at sometime around 9 PM, Edelman reportedly jumped onto the hood of the Mercedes, perhaps thinking he was trying to break a tackle by Austin Johnson or Matt Dickerson.

Julian Edelman, who originally hails from California, and his buddies were in Beverly Hills when the incident occurred.  It isn’t too surprising that booze was involved, and it didn’t take long for the police to drop in.  There were apparently officers in the area working a robbery case, and someone sent the word out about the NFL star’s antics, bringing the Beverly Hills Police Department to the scene to figure out what was going on.

Edelman was arrested at the scene, but wasn’t held – apparently, he wasn’t so inebriated that a night in the tank was called for.  He was cited for misdemeanor vandalism and sent on his way with his friends.  He will now have to report back to court on April 13 to learn his fate, provided he doesn’t settle with the car’s owner in advance.  Since it was a misdemeanor charge, and not a felony, he could potentially walk with no criminal charges if the owner of the Mercedes decides not to take further action.  Maybe he’ll just ask Edelman to autograph the hood and then hang it in his living room.

The Pats may not be as lenient against him, however.  Julian Edelman is free to do what he wants in his off-time – within reason.  He’s still under contract, which means the team wants to make sure their asset is in good operating condition when they return to the gridiron.  Jumping on hoods of cars isn’t the best way to guarantee that condition, and Edelman is already slated to go under the knife for his shoulder and knee injuries in the off-season.  The Patriots haven’t weighed in on the incident or any possible penalty they might issue for Edelman’s actions.

The NFL could decide to hold Edelman accountable, as well.  The collective bargaining agreement between players and the league prevents any activity that could harm the league’s reputation, but, with everything else that is going on in the NFL, this would hardly be considered anything more than a mere fading blip that will soon be forgotten.  Given that the attack on the Mercedes happened during the team’s offseason, away from the field and no one was hurt, Edelman will most likely avoid any retribution on the part of NFL brass and Roger Goodell.

Edelman was in California for more than a trip along Rodeo Blvd.  On Sunday, he was expected to be found at the California Strong Celebrity Softball Game held at Pepperdine University.  Whether looking to avoid additional media coverage or because he was nursing a hangover, he didn’t show up for the game.  Terrell Owens was on hand, though, and the former NFL wide receiver showed no surprise over Edelman’s antics.  When approached by TMZ about the incident, he simply said, “That’s Julian Edelman being Julian Edelman.”