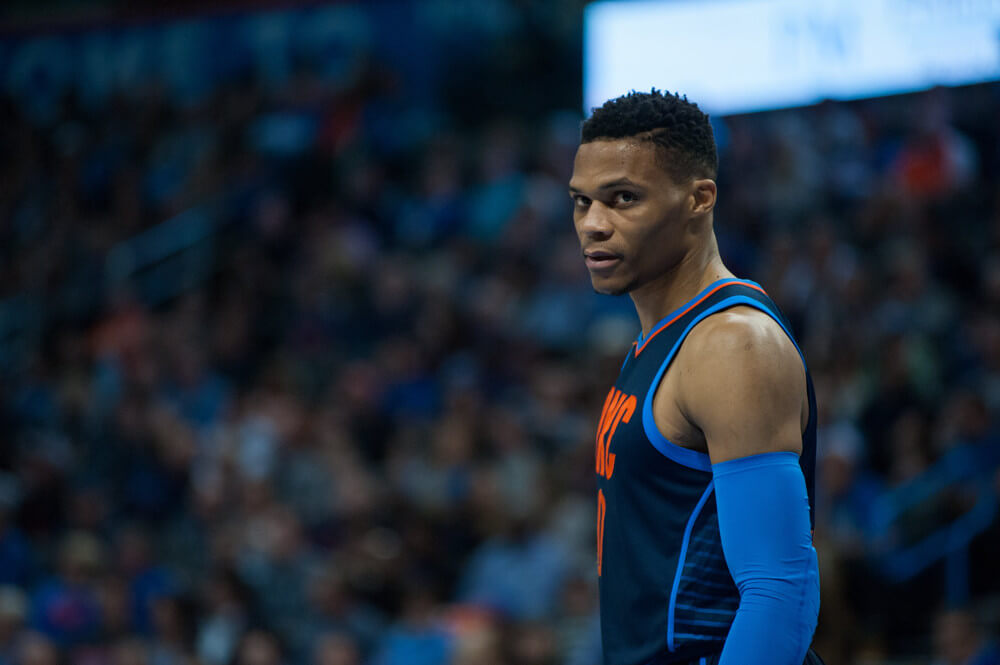 Shane Keisel lost his Jazz hands last season after he was banned for life from the Utah Jazz’s home court, Vivint Smart Home Arena.  The (former) fan was thrown out after launching “discriminatory” words at then-Thunder point guard Russell Westbrook and was told to never come back.  That was this past March, and Keisel now wants what he calls justice as the Jazz and Westbrook are sued.

According to the Salt Lake Tribune, Keisel is suing the Jazz, as well as Westbrook, for a total of $100 million in damages.  He must consider himself a very valuable person.

According to reports, Keisel was at a Jazz game with his girlfriend, Jennifer Huff, against the Oklahoma City Thunder on March 11 when a verbal altercation occurred between Westbrook and Keisel.  Keisel alleges that he only engaged in normal heckling against the player, which was consistent with what other fans were doing.  Westbrook took the words a little too personally and fired back his own verbal assault in retaliation.

Westbrook argued at the time that Keisel had used racial and discriminatory remarks, alleging that he heard the fan tell him to “get down on your knees like you used to.”  Keisel counters that he only told the sued Westbrook to “ice those knees up.”

The incident was caught on tape and shared across social media platforms, even leading to the Jazz getting involved to understand what had actually transpired.  Once they reviewed the incident, they banned Keisel, accusing him of “excessive and derogatory verbal abuse directed at a player.”

Lawyers for Keisel and Huff, in an apparent attempt to drum up as much sympathetic support for their clients as possible, say in the lawsuit that the crowd that night was “shocked” by Westbrook’s outburst.  However, looking at the video, it appears more like the fans within earshot enjoyed the back-and-forth banter.

The NBA reviewed the matter and didn’t completely take sides with Westbrook, who is now with the Houston Rockets.  The league slapped him with a $25,000 fine “for directing profanity and threatening language to a fan.”  In the video, he can be heard addressing the two fans, telling them, “I’ll f— you up.”

Because of the incident, and the ensuing social media explosion that followed, Keisel asserts that he and his family have been harassed and that he has lost work because of the publicity.  Keisel and Huff believe they’re entitled to be compensated for the stress the situation has caused, and want $68 million for him and $32 million for her.

In a statement sent to various media outlets, the Jazz responded to the lawsuit, sharing its opinion that Keisel doesn’t have a case.  Frank Zang, senior vice president of communications for Larry H. Miller Sports and Entertainment, owner of the Jazz, stated, “The organization investigated the underlying incident and acted in an appropriate and responsible manner.  We intend to vigorously defend the lawsuit.”

Across the league, Jazz fans are seen as some of the most biting, attack-prone individuals to be associated with the NBA.  A number of players came to Westbrook’s defense following the incident, and a subsequent one during the playoffs in which he was allegedly referred to by a Jazz fan as “boy,” acknowledging that the Utah crowd can sometimes cross the line.

Etan Thomas, who retired from the basketball court in 2011 after ten years, penned an op-ed piece for the Salt Lake Tribune this past June in which he stated, “Every away building is a hostile environment with passionate fans rooting for the home team and sometimes crossing the line.  But in Utah, it’s different. There are abundantly clear racial undertones to the heckling that seem to hover in the arena.”

The Jazz, during its investigation into the Keisel controversy, determined from the video footage that he had, in fact, told Westbrook to get down on his knees, not to ice up his knees as Keisel tries to now assert.  Whether he was just following the crowd or had downed one too many brews at the game, Keisel apparently wasn’t thinking with a clear head and certainly isn’t worth $100 million.