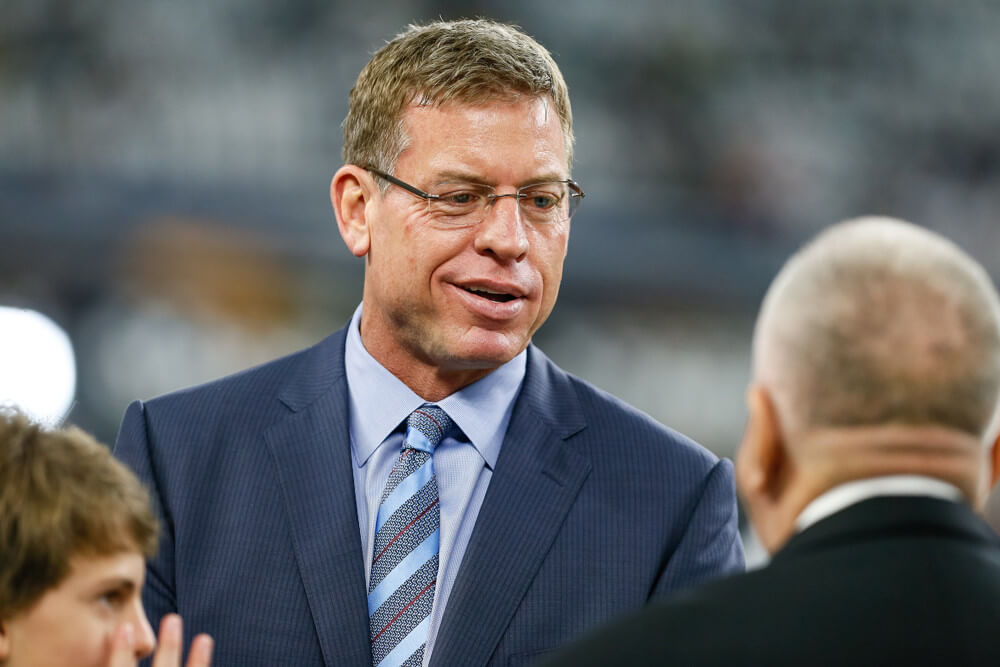 Cold, Jerry: Aikman Wants To GM, But Not Under Jones

Cold, Jerry: Aikman Wants To GM, But Not Under Jones

Troy Aikman may always be known as a Dallas Cowboy, especially since he led the team to three Super Bowls, but his love for the team apparently left when he did.  Now an announcer and commentator for NFL games, the former MVP and Pro Bowler quarterback has ambitions of being in the driver’s seat of a team as its GM.  If it were to happen, though, he makes it perfectly clear that it would never be under current Cowboys owner Jerry Jones.

During an appearance on a local radio show in Dallas this week, the subject of Aikman running a front office came up.  Without missing a beat, he stated that he would love to, but just not under Jones.  He explained, “It’s a real long shot.  It’s unlikely Jerry will ever bring somebody in who can help this team in that regard because he’s been real stubborn and steadfast that he’s the one in charge.”

Those comments appear to indicate that there would definitely be a power struggle over the direction the team should take, and that Jones wouldn’t be willing to listen to the real experts in the game to get back on top.  With his knowledge of and experience in the game, Aikman would be a good fit to take the lead.

Aikman made it seem as though this might be one of the reasons the team is performing so poorly now.  He stated, “I think in a lot of ways, until that changes, this team is going to have some problems. But would he ever ask me to come be a part of it? That would be a real leap of faith. I don’t envision that happening and I don’t envision that happening at any point, quite honestly, no matter who’s in charge out there.”

The former quarterback and current Fox Sports frontman has been critical of the way the Cowboys have performed this season, most notably in a recent game against the Chicago Bears.  After losing to the Chicago squad 31-24, Aikman made it clear that the team was “embarrassed” and that it is struggling in a number of ways.  He almost sounded as though the Cowboys should write off this year and start looking for better options next season.

Aikman added about the GM possibilities, “I guess it’s something that I guess I’ve always somewhat entertained. I’ve had a chance to talk with (Broncos general manager) John Elway in previous years. I’ve visited with John Lynch, and the decision that he made to take on that job in San Francisco.

“I’ve said many, many times, I still believe there’s another frontier for me — maybe there’s not — but I believe that there is, and I think that might very well be it. It’s something that I think would be very challenging. I’d be giving up a lot to leave the job that I have to take on a role like that. It’s an all-consuming job, and I certainly recognize that, but I think the challenge would make it worthwhile.

“Whether or not I’m ever afforded that opportunity, we’ll see, but with each year that passes, the likelihood of it happening becomes less and less.

“I understand that more and more teams want to go young and kind of groom somebody that’s gonna be there for the long haul. But relatively speaking, I’ve got a lot of great years left, and I feel that having been in a championship locker room and knowing what that looks like, what that feels like, and then I guess my job now as a broadcaster, I’ve been in those organizations.”

Not many players – former or current – would make good managers.  However, Aikman is one of the few who would excel at the job, provided he was allowed to do what his title suggests – manage the team.