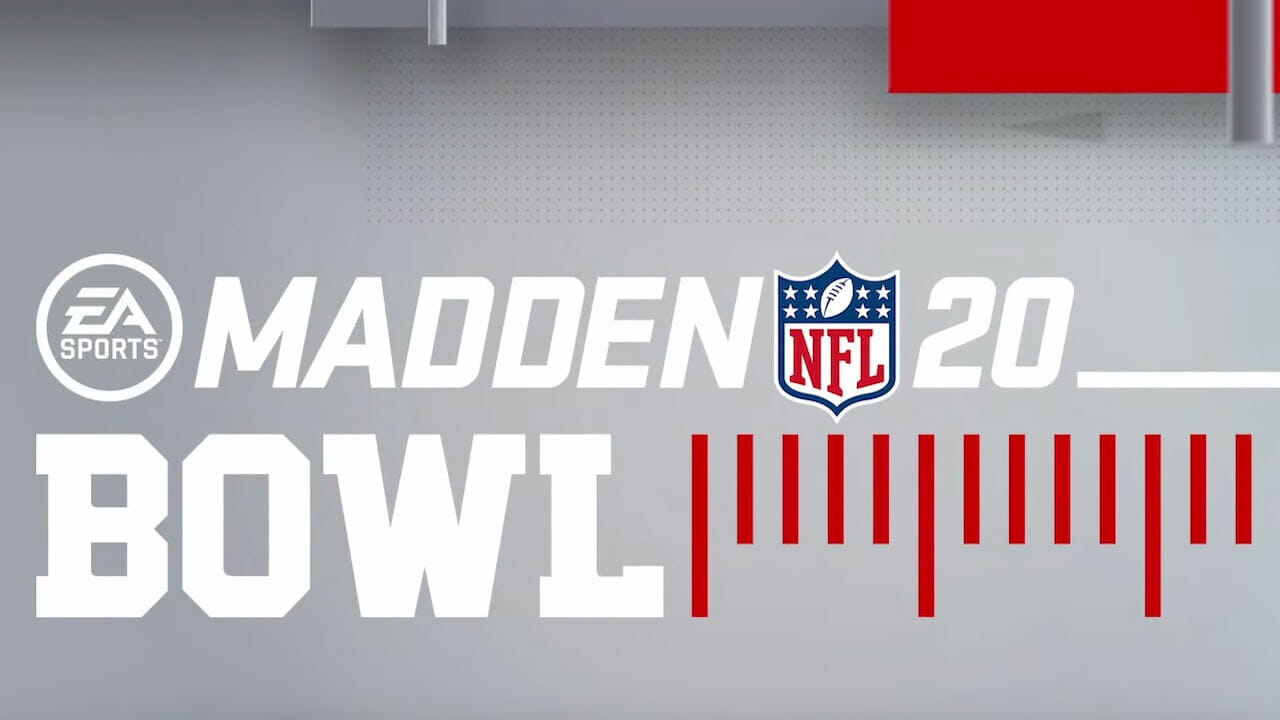 With the COVID-19 pandemic robbing us of sports, bettors have to look a little harder than usual to find events. This week kicks off the Madden Bowl, and we’ve got a preview and betting odds for you to get up to speed. The 2020 Madden Bowl is the culmination of this year’s Madden Championship series and we outline our picks. We are down to 16 competitors who have been seeded into four groups who play on four separate days. Each player will be looking to secure one of 12 playoff spots with quarterfinals starting on May 15th.

Like many eSports tournaments these days, the 2020 Madden Bowl will be streamed on the ESPN app, Twitch, and Youtube. The quarterfinals and finals will even be shown on ESPN2 on May 16th.

The Madden NFL 20 Bowl has a prize pool of $220,000 up for grabs and is aiming to bring new fans to the eSports side of pro football. As part of EA’s ‘Stay How. Play Together” initiative that encourages people worldwide to connect through gaming when we can’t be physically together. ESPN’s involvement coincides with their initiative, #OneTeam, that is designed to bring the sports world together during these times of separation.

Madden 20 has been a popular alternative during these days of quarantine. Offering sports fans and bettors a different avenue to continue enjoying the sport they love.

The event has been moved up and thrust into the spotlight after the success of the Celebrity Tournament. Synching up with the NFL draft, it pitted NFL stars and celebrities against each other. Marquise “Hollywood” Brown and Snopp Dogg made it to the finals where Brown eventually prevailed.

The championship tournament saw a ton of betting action, and viewership was through the roof. Now organizers hope to ride the wave of that event and see this tournament beat their record-breaking 2019 viewership.

Qualified players include Madden NFL Club winners from the Browns, Cardinals, Colts, Eagles, Jaguars, Falcons, Packers, and Texas. They will be joined by the winners of this year’s belts, Serious Moe and Noah, along with the winners of the last chance qualifiers.

Group play takes place over four days, and betting odds are ready for review with a few first-round matchups that look very beatable.

So let’s kick off our picks and parlays. Day one sees two of the best players in this tournament, not only sharing a group but also playing a crucial head to head game. Both VoLTeRax and Joke have legit shots at winning it all, and this opening round can help their playoff seeding.

While VoLTeRax (-120) is the slight favorite to win, I like Joke (-110) to come out on top and sweep the entire group. Joke is one of just three players who qualified for every EA Major this season with Boogs and Henry being the other two. The big difference with Joke is he finished the year with the number one spot on the MCS points board and even set a new record in the process. He also played more games this season than anyone else with 31, winning 27 of them, which gave him the league’s highest win rate. This marks his 11th EA Major appearance to date, which ranks him 2nd best all time. He has a mind for the game and sees every angle and advantage there i. His rushing attack is also impeccable, and I think this will be his eventual path to victory in all three games on Thursday. A parlay on these games would end up with odds of +243, and Joke should dominate his other two opponents.

Much like Joke in group A, I see a sweep of Group B by Henry, who is the defending Philadelphia Eagles Club Champion. He, along with Joke and Boogs, has not missed a Major this season, and again, I love consistency on things I wager. Henry was an instant success after making the Grand Final in his first event at 16 years old and finished second behind Serious Moe. I am not sold that Henry has what it takes to make it to the finals again, but he is better than everyone else in this group and should roll to a 3-0 performance. I don’t hate a parlay on these three games as well, which would be good for a 2/1 payout.

We will return after group play to update these odds for the playoffs. For now, enjoy the new world of competitive eSports and try to make some money along the way.

NFC East Over Under Win Total Breakdown
NASCAR Leads Way On Road Back To Sports In U.S.
Get Free Picks & Exclusive Offers