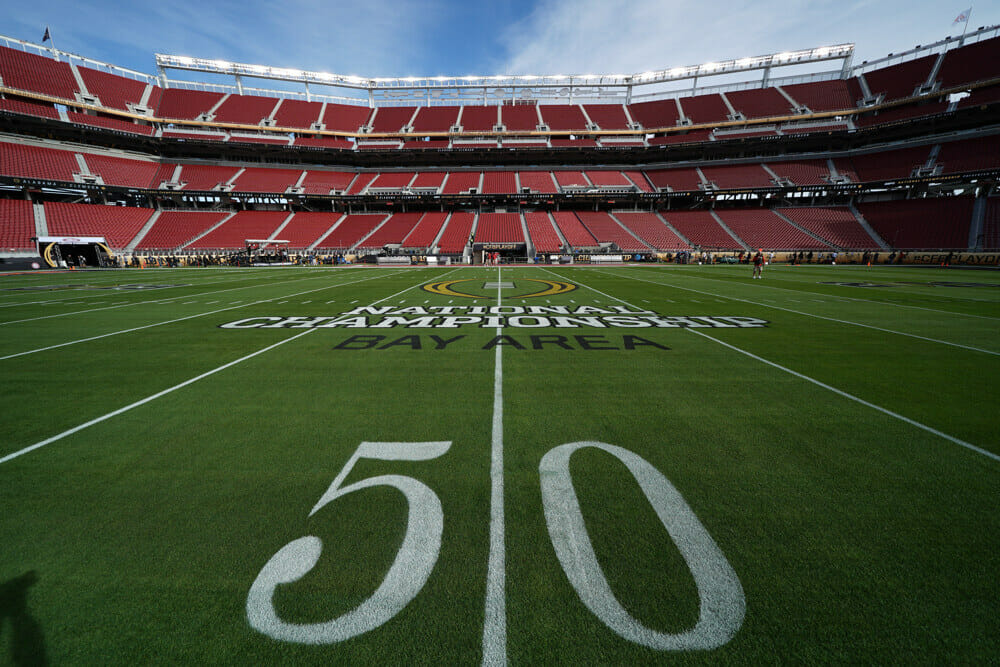 It comes as no great surprise that now there is talk of delaying the college football playoffs this year.  The COVID-19 pandemic has wreaked havoc with NCAA football this season, and it’s not over yet.  More changes could be coming soon if things don’t improve.

Larry Scott, commissioner of the Pac-12, is petitioning the College Football Playoff Management Committee (CFPMC) to actually delay the start of the NCAA Playoffs due to the ongoing threat of the COVID-19 pandemic which has seen a resurgence with winter coming on.  The committee is discussing the issue today, but at this point, a delay does not seem too likely.

No Schedule Changes Announced Yet

The Final Four are still scheduled to play in the semi-finals matchups on New Year’s Day at the Rose Bowl in Pasadena, California, and at the Sugar Bowl, now played at the Super Dome at New Orleans.  The CFP National Championship game is still scheduled to take place on January 11th in Miami.

The CFPMC said that they would study the issues involved in moving these games back a couple of weeks; however, rumor has it that these discussions are just to appease Scott and others who support the move.  The committee has been pretty steadfast all season long that these dates are fixed and that is when and where the games will be played.

The committee consists of the ten conference commissioners and Notre Dame athletic director Jack Swarbrick.  It is reported that they are prepared to be “talking about anything and everything,” according to CFPMC executive director Bill Hancock.

Hancock also confirmed that Scott did make a formal request, but gave no indication beyond that of how he was leaning on the issue.  The New Year’s Day date for the semifinals has become something the college football fans across the country look forward to, and changing that date would mean upsetting a lot of the people who avidly support college football year after year.

The Pac-12 had initially opted to cancel this football season and start again next year, but pressure from alumni and others caused them to capitulate and play a conference only schedule like the SEC and others are doing.

However, the rapid spread of the COVID-19 pandemic throughout the area, especially on the campuses of Arizona State and Utah caused five Pac-12 games to be canceled and no open dates are left available to make up those lost games.  Even the Big 12 commissioner Bob Bowlsby is getting into the act with talk of delaying the playoffs.  Bowlsby said that the CFP does not want to play into February, but doesn’t rule out the possibility.

The CFP Championship Title Game is still scheduled for January 11 at the Hard Rock Stadium in Miami and there is very little interest in changing that.

The Rose Bowl has not traditionally come off its 2 PM PT kickoff on January 1 unless it conflicts with NFL playoff games.  Other New Year’s Six bowls are not as locked in; however, the Rose Bowl is key.  There would probably not have been a BCS or a CFP had the Rose not conformed to being a part of the postseason landscape.

South Florida will host two games.  The traditional Orange Bowl will be January 2 between an ACC team (including potentially Notre Dame) and an SEC or Big Ten opponent.  Eight days later, Hard Rock Stadium will host the CFP National Championship.

Too Many NCAA Games Already Impacted

At least 58 FBS games this season have been postponed for canceled because of COVID-19 issues.  With time ticking in the regular season, conferences are running out of dates to reschedule games.  That presents another possible problem for the CFP.  What if playoff games have to be postponed at the last minute due to COVID-19 outbreaks?  In the first two weekends of this season, 25 games were postponed or canceled.

Any postponement of the CFP games could create scheduling issues with NFL playoffs.  Both the Sugar Bowl semifinal (New Orleans Saints) and CFP National Championship (Miami Dolphins) could be impacted by teams playing on those fields in the NFL playoffs.  The Rose Bowl is not the home of an NFL franchise.