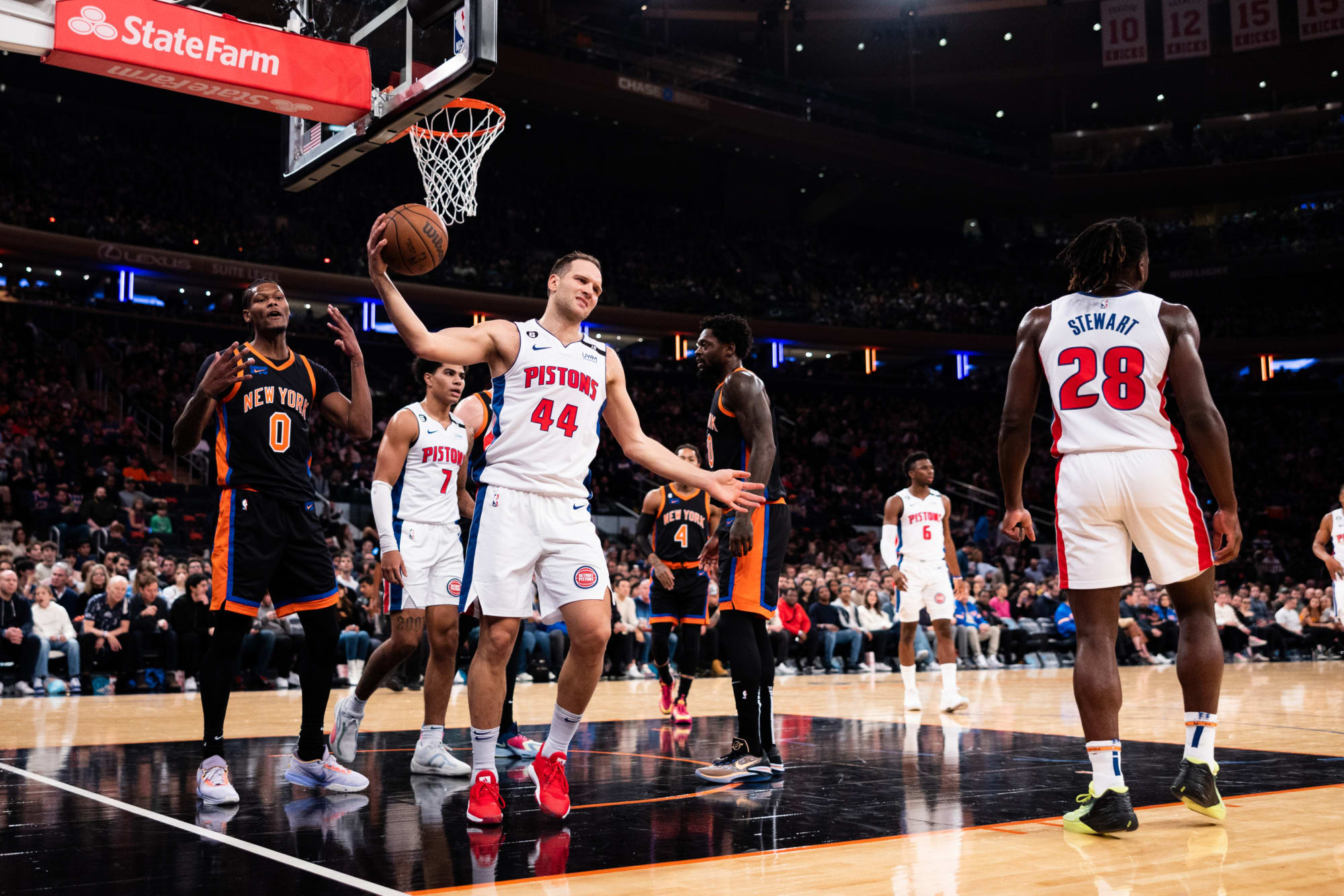 Knicks And Pistons Both Want To Stop Slides Tonight

Knicks And Pistons Both Want To Stop Slides Tonight

Three games are on the slate in the NBA on Tuesday in what should all be competitive conference matchups. Here’s a look at tonight’s action as November comes to a close.

Knicks And Pistons Both Try To End Losing Streaks

The New York Knicks and Detroit Pistons clash tonight at Little Caesars Arena for their third meeting of the season. New York won the first two against Detroit on their home floor, with the latest being a 121-112 victory on November 10.

The Knicks have lost two straight games and are last in the Atlantic Division with a 9-11 record. They have lost four of their previous five games and are 3-2 in their last five on the road.

Detroit is last in the Central Division standings and has an NBA-worst 5-17 record. The Pistons broke a seven-game losing streak with two wins against the Utah Jazz and Denver Nuggets on their most recent road trip.

However, they’ve now lost two straight after their last defeat at home against the Cleveland Cavaliers, 102-94. Two of their top scorers, Bojan Bogdanovic and Marvin Bagley III, are both questionable for tonight’s game with injuries.

New York wins for its second straight on the road.

The Golden State Warriors and Dallas Mavericks meet for the first time this season in a key Western Conference matchup. The Warriors have won five of their last six games and are now over the .500 mark with an 11-10 record after beating the Minnesota Timberwolves 137-114 on Sunday.

They’re tied for third in the Pacific Division with the Sacramento Kings and trail the Phoenix Suns by 3.5 games for the lead in the standings. Golden State is 8-3 since their recent five-game losing streak.

Dallas has been headed in the wrong direction since starting the season with a 6-3 record. They’ve lost seven of their last ten games and are currently on a four-game losing streak.

However, they’ve won three of their previous four games at home, where they have an 8-3 record on the season. The Mavs lost at Milwaukee in their last game on Sunday, 124-115, which was their fifth straight road loss. Also, recent reports indicate that Dallas intends to sign veteran PG Kemba Walker to help bolster its backcourt in support of Luka Doncic.

The Los Angeles Clippers travel to Portland to face the Trail Blazers on Tuesday night as the rivals meet for their first season matchup. Los Angeles has a 12-9 record and is second in the Pacific Division behind the Phoenix Suns by 2.5 games in the standings.

LA won its last game 114-100 over the Indiana Pacers at home, as Ivica Zubac had the best game of his NBA career with 31 points and 29 rebounds. Unfortunately, LA will be without John Wall, Kawhi Leonard, and Paul George for tonight’s contest.

Portland has fallen to second in the Northwest Division standings after losing four of its last five games. They’re 11-9 on the season and are two games behind the Denver Nuggets.

The Blazers got out of the gate fast, starting the season 4-0 and winning nine of their first 12 games. Portland is 2-6 in its last eight games after losing on the road to the Brooklyn Nets 111-94 on Sunday.

Portland wins at home over the shorthanded Clippers.