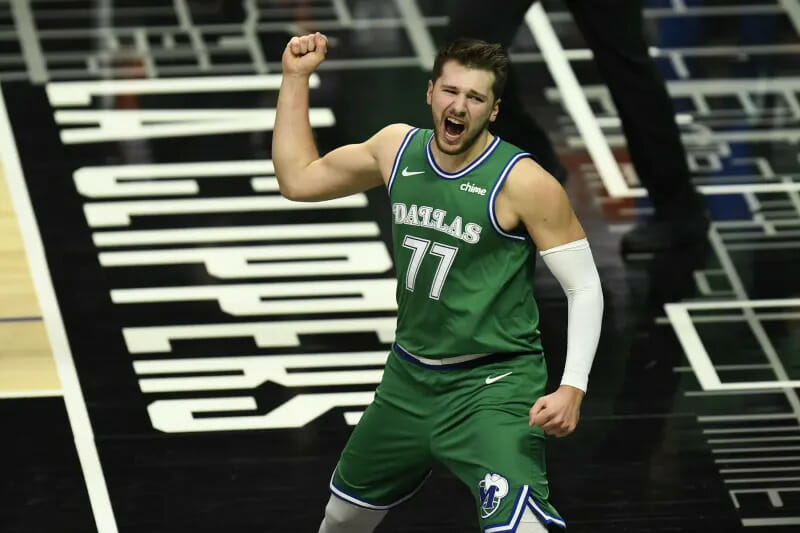 The Mavericks Help The Clippers Set An NBA Record

The Mavericks Help The Clippers Set An NBA Record

It was an action-packed Sunday for the NBA yesterday, as 20 teams hit the courts to play in 10 games as part of the holiday scheduling that included playing some games on Friday, Christmas Day, as well. After beginning the 2021 season on December 22, the NBA, against all odds, is up and running and already showing signs of some great matchups coming to us this year.

The Mavs Find Their Mojo

The most incredible, the most inspiring, and the most awesome game that went down on Sunday had to be the Dallas Mavericks putting on a shooting clinic and leading the sleepy LA Clippers by a whopping 50 points at halftime, which set a new NBA record.  It was a game that defined the term ‘rout’ in NBA basketball.

The Clippers, playing without Kawhi Leonard, who got inadvertently elbowed in the mouth by Serge Ibaka in a previous game and required eight stitches to put him back together, trailed the Mavericks 77 to 27 points at halftime and went into the record books with the dubious honor of being the only team ever to be down 50 points at halftime in the shot-clock era, which began way back in 1954.

Paul George put up 15 points in the first half before sitting out the second and Ibaka had 13 points and 9 rebounds before the coaches sat him down after three quarters of play.  The game was a bit surrealistic after the first half came to a close.

Stranger still since the Clippers had opened the season by defeating the world champion LA Lakers and then beat the Denver Nuggets in their second game of the season.  Final score: Dallas Mavericks 124, Clippers 73.

Warriors And Bulls Go The Distance

The game between the Golden State Warriors and the winless Chicago Bulls was quite the opposite type of contest with the action staying pretty tight for the whole game.  Even though the Bulls came in 0-3, they played their hearts out and almost came away with the win.  Zack LaVine put up 33 points in a losing effort for Chicago. But then the irrepressible Stephen Curry scored 36 points in the game.

However, it was Damion Lee who sank a 3-point shot with only 1.7 seconds on the game clock to propel the Warriors over the hapless Bulls for their first win of the season.  It was Lee’s fourth 3-point shot in 5 attempts.  Lee finished with 12 points on the evening.   Curry shot 11 for 25 from the field sinking 5 of 15 3-point shots.  It was reported that Curry, practicing at the Bull’s facility the day before the big game, made 105 straight 3-point shots, which does not even sound possible.  Unlike the Mavericks-Clippers game, this one went down to the wire.  Final score: Warriors 129 and the Bulls 128.

Kyle Kuzma played in place of big man Anthony Davis and scored 20 points in the first half as the defending NBA Finals champion Lakers took on the Minnesota Timberwolves, with Karl-Anthony Towns sitting it out for Minnesota along with Anthony Davis for the Lakers. LeBron James put up 18 points and the Lakers went wire-to-wire to defeat the Timberwolves by a final score of 127-91.

Doc Richards brought his Philadelphia 76ers team to Cleveland to take on the Cavaliers on Sunday only to be out scored in every quarter by the undefeated Cleveland team.  Andre Drummond put up 24 points and grabbed 14 rebounds with 3-steals.  Collin Sexton added his 22 points and Darius Garland had 14 points and 7 assists for the Cavaliers who are coming off a terrible season last year when they had the second worst record in the NBA.  Final score Cleveland Cavaliers 118 and the Philadelphia 73ers 94.