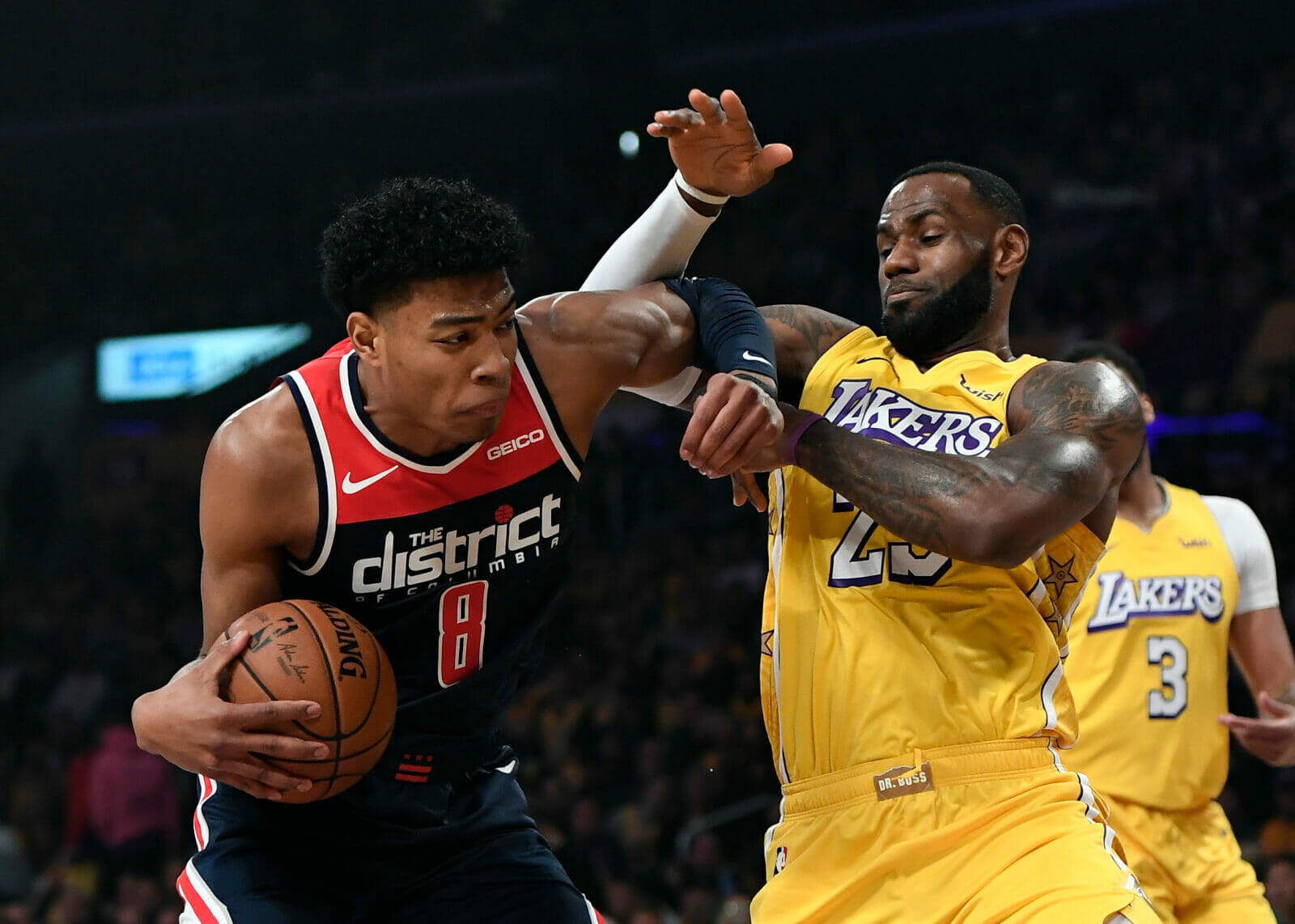 For basketball fans, starting the week with the best attitude means watching some NBA action and the best offensive moves around.  Surprisingly, the LA Lakers got their third straight loss and have to now be wondering where the problem is.

Lakers On A Roll, But Not A Good One

After going into overtime, the Washington Wizards managed to extend their longest winning streak in three years to five straight against the slumping Lakers 127-124 on Monday night.

Bradley Beal had a lot to do with that, as he scored six of his 33 points on three consecutive possessions while the overtime was almost completed.  Russell Westbrook also gave a huge contribution after scoring 32 points for the Wizards, who took advantage of a missed free throw by LeBron James late in regulation.

James tried to give it all and got 31 points, 13 assists, and nine rebounds.  However, it still was not enough as the Lakers now picked up their fourth loss in five games, something that isn’t common for the defending NBA champions.  The Wizards will visit the other LA team today, while the Lakers are going to visit the Utah Jazz on Wednesday night.  With the run the Jazz have been on, that might also lead to another Lakers loss.

With an amazing third quarter, the Chicago Bulls got a victory against the short-handed Houston Rockets, 120-100, on Monday night. Coby White and Zach LaVine scored 24 and 21 points, respectively, and Chicago had a total of 46 points in the third quarter, outscoring the Rockets by 20 points to break open a tight game.

Houston head coach Stephen Silas commented after the game that LaVine’s breakout quarter was pivotal. On the other hand, for Houston, David Nwaba scored 22 points, but it wasn’t enough for the team, as it has now lost its eighth straight.  As part of what’s coming next for these teams, the Bulls will play their next two games at home, starting against Minnesota on Wednesday night.  The Rockets, on the other side, will visit Cleveland on Wednesday night to begin a two-game trip.

With some outstanding six 3-pointers, Duncan Robinson got a total of 22 points on Monday night, which led the Miami Heat to defeat the Oklahoma City Thunder, 108-94, in the finale of their seven-game road trip.  That victory was also made possible because of Kendrick Nunn, who added 20 points and nine assists, while Bam Adebayo got a total of 19 points and 13 rebounds.

For the Thunder, who were outscored 63-40 after halftime, Shai Gilgeous-Alexander scored 27 points, but it looks like they couldn’t recover after that.  Mark Daigneault, the Thunder’s head coach said, “I give them a lot of credit. They came out of halftime really focused and we had to earn everything on both ends of the floor in the second half.”  Both teams are going to host their next games on Wednesday.  The Thunder are going up against the San Antonio Spurs and the Heat will face the Toronto Raptors.

Devin Booker of the Phoenix Suns got everyone really excited after hitting a 3-pointer with two seconds remaining in the third quarter and, due to some shots like those, no heroics were needed in the fourth.  He managed to score a total of 34 points, while Deandre Ayton added 19 more as the Suns rolled past the Portland Trail Blazers 132-100 on Monday night.

There has been a discussion for a few months already about whether Booker should earn his second straight All-Star selection.  He’s been showing great performance lately, and last night wasn’t the exception. He was eight for eight on the free-throw line.

The 32-point win is now considered the Suns’ largest margin of victory this current season.

Portland was having a six-game winning streak but seems to be unable to get back on track as they’re now losing their second straight game.  Damian Lillard led the short-handed Blazers with 16 points, while Nassir Little added 18 off the bench. The Suns will host the Charlotte Hornets on Wednesday while the Blazers visit the Denver Nuggets tonight.

Jazz Have Easy Night Against Charlotte

The Utah Jazz easily overcame the Charlotte Hornets 132-110 on Monday night, and, according to STATS, they enjoyed another record-breaking performance after setting a franchise mark for trips with 28, including 19 off the bench, the most by any team’s backups in NBA entire history.

In a tight match, the Dallas Mavericks achieved a victory against the Memphis Grizzlies, 102-92 on Monday night.

From Firings To Ejections, A Lot Is Happening In The NBA
Get Ready To Place Your Bets On Some Hot NBA Games Tonight
Get Free Picks & Exclusive Offers