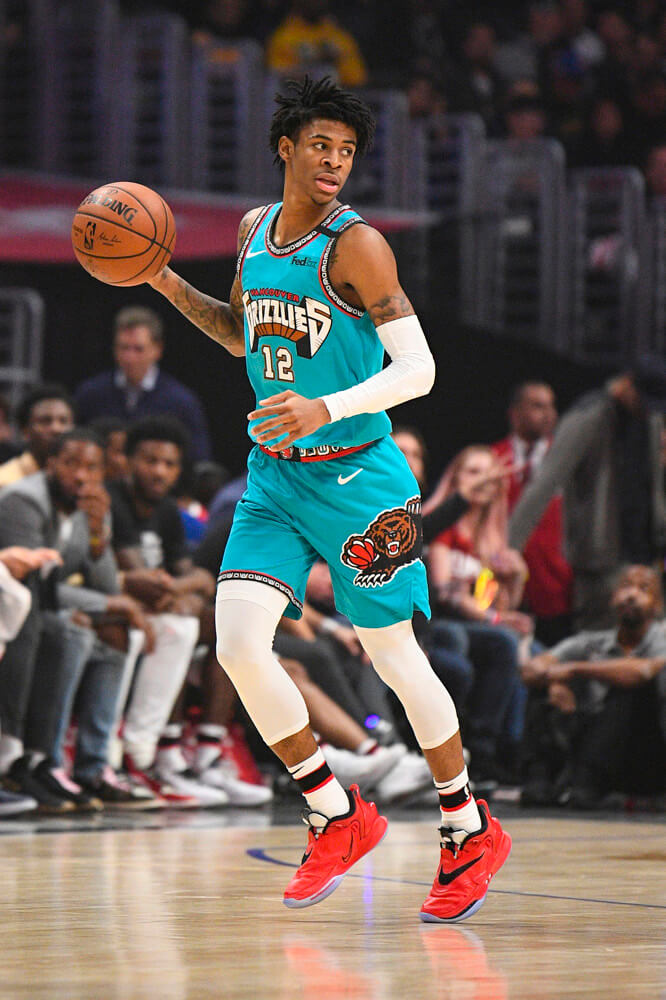 There were some good close games in NBA action on Monday evening, but there were also some notable absentees from the court as a combination on minor injuries and the COVID-19 protocols kept several star players on the bench, or watching from home.  The new NBA season may be here, but it is still dealing with some of the same problems it saw in the previous one.

The Grizzlies Get Going

The Memphis Grizzlies won their first game of this convoluted NBA season by outlasting the Brooklyn Nets in an overtime thriller and coming away with at 116 to 111 victory in overtime.

However, the win proved to be a costly one for the Griz when, with only a couple of minutes left in the first half,  second-year star shooter Ja Morant attempted to block a shot by the Nets’ French import Timothe Luwawu-Cabarrot and somehow managed to roll his ankle when he came back down.  Morant limped off the floor and was taken to the locker room in a wheel chair, which was a rather dramatic scene.  He apparently suffered a sprained ankle that will need to be nursed back to health.

Kyle Anderson took over for the Grizzlies and scored 28 points in the game, which included 4 three-point shots, along with 7 rebounds and 3 assists. Then, it was Anderson who sank three of four clutch free-throws in the final seconds of overtime.

It was Caris LeVert who led the Brooklyn squad with 28 points and 11 assists.  The Nets rested both Kevin Durant and Kyrie Irving as they are still coming off long injury layoffs.  Even worse for the Nets, Spencer Dinwiddie suffered a partially torn right knee ligament on Sunday and is undergoing surgery to get that fixed.

Because of the abbreviated offseason this year, nagging injuries that would normally have time to heal never got the chance to completely come back to 100%.  Playing them too early or too hard might just jeopardize their performance for the remainder of the season.

The Lakers Get Overpowered

The LA Lakers, who still must be buzzing over the NBA Finals Title they just won, are looking better than ever and are naturally heavily favored to win another title this year.  Anthony Davis is now looking like the perfect fit for LeBron James.  The two are in sync more often than not. But the mighty Lakers fell to the Portland Trail Blazers on Monday evening by a final score of 115 to 107.  The loss was their second in four games, so the Lakers are not exactly off to a hot start this year.

James, as usual, led the Lakers in scoring with 29 points, nine rebounds and six assists while Davis put up 13 points with 10 rebounds.  Lakers head coach Frank Vogel said after the game, “I thought we came out with great energy,” when the Lakers jumped out to a 13-point lead in the first quarter, “When they made their runs we weren’t able to sustain the energy we began the game with.”

Damian Lillard posted a blazing 31 points, with Gary Trent Jr. right behind him with 28 off the bench.  As a matter of fact, Portland’s bench outscored the Lakers’ bench 45 to 23.  Therein may lie the difference in the game. The final score was Portland 115 – LA 107.

Jazz Take It To The Buzzer

The Utah Jazz pulled up to snatch a victory from the Oklahoma City Thunder.  Thanks mostly to Donovan Mitchell and his 12-point run as time was running out, the Jazz grabbed a 110-109 win, with Mitchell sinking the game-winner with seven seconds on the clock.  When the Thunder tried to respond, in came Rudy Gobert to block a shot and give his team the victory.

The Denver Nuggets had a pretty good night against the Houston Rockets, who were forced to play without John Wall, DeMarcus Cousins, Eric Gordon and Mason Jones because of COVID-19.  A triple-double (19 points, 12 rebounds and 18 assists) by Nikola Jokic helped secure Denver’s 124-111 win, and a total of seven Nuggets players all scored in the double-digit range.  James Harden tried to carry his Rockets, scoring 34 points, but he couldn’t do it all on his own.