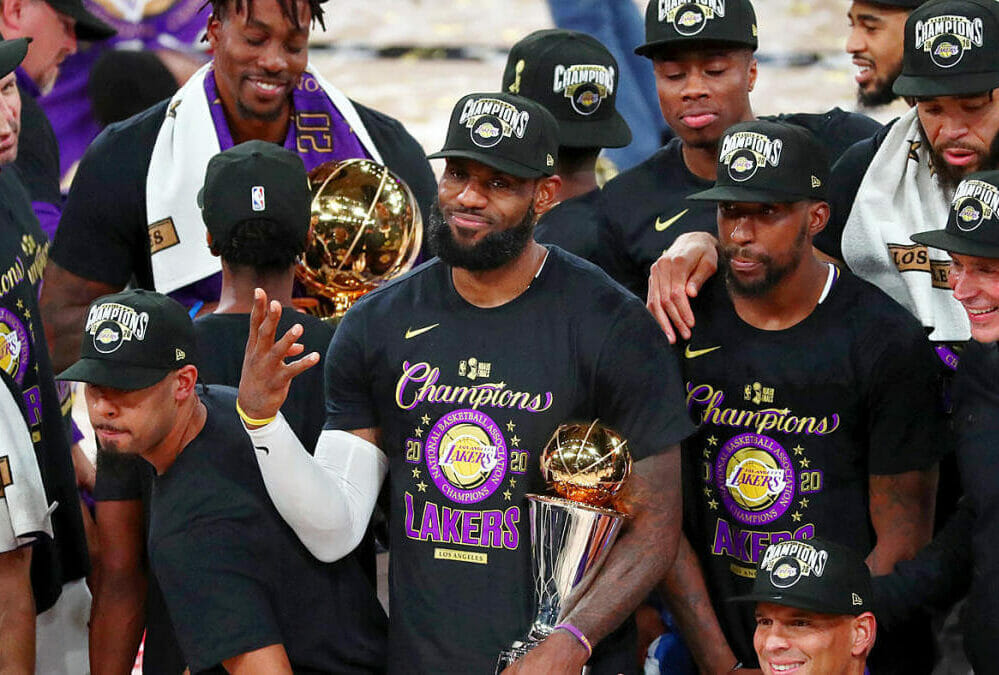 This NBA season has been unique, to say the least, but that’s what made it one of the best in recent history.  The COVID-19 debacle may have slowed things down for a while, but teams emerged and gave performances in the NBA Bubble that were unlike anything ever seen before.

As the season moved into the postseason and then to the final two teams, there was no shortage of debate regarding who might win the title.  Deep inside, most people really knew what the outcome would be, and the LA Lakers finally took the championship in Game 6 to now have 17 titles to their credit.  They now match what the Boston Celtics have, with both teams sitting on top of the most-NBA-wins column.

Love him or not, LeBron James produces one thing consistently, wherever he goes, that’s championships.  Everywhere he has played professional basketball, he has left trophies and traditions that will endure for ages.  The man delivers.  When LeBron first moved to Los Angeles, the move looked to be his first flop as he was saddled with a group of young players who, although bursting with potential talent, just never seemed to gel as a basketball team.

Then along came Anthony Davis from the Pelicans, and, oh my, did that ever provide the spark that had been missing on the young Lakers team.  Then, in one of the best deals of the season, the Lakers managed to acquire the services of veteran baller Rajon Rondo, who brought years of playoff experience to the squad.  Rondo, who has been just average for the past few seasons, seemed to reinvent himself with the Lakers and became a key element in their game.

Then there was the guy who came out of nowhere with the nearly impossible name of Kentavious Caldwell-Pope to fill in the gaps between the super stars and provide solidarity to the Lakers lineup.  No wonder they call him KCP.  In the championship game 6, Pope scored 17 points and finished as the Lakers’ third leading scorer behind you know who and that other guy.

Danny Green once again proved himself to be a solid veteran trouper showing up at odd moments, when least expected, with a beautiful triple from the corner and always providing excellent defensive play.   Another spark plug for the Lakers is Alex Caruso, who, even though he is losing his hair, still provides the team with excellent play time after time.  Lakers Coach Frank Vogel actually started Caruso in place of Dwight Howard for that all important game 6 against the Heat.

The Lakers Found Their Superpowers

All it took was a couple of superstars, a journeyman player in Rondo and to round out the squad with talented young players, who, perhaps are not as well known, still played a great part in the Lakers winning their 17th NBA Championship.

LeBron James was, and is, the undisputed leader of the Los Angeles Lakers basketball team.  Several quality players have left the Lakers squad because they could not deal with that.  But, when Anthony Davis arrived on the scene, the two just gelled in that magic sort of way that creates great teams and great champions.  It is the game of basketball at its very best to see two guys out on the court working so smoothly together to complete a huge play and put the Lakers in the lead once again.

The NBA Season For The History Books

This NBA season was like no other in that it was played in a Bubble at Disney World in Orlando.  There were no games at the Staples Center or Madison Square Garden this year.  It must have been very odd for the players to deal with at first.

When the preliminaries were over, it was down to the Lakers and the Heat featuring Jimmy Butler.  The series went to Game 6 where the Lakers defeated the Heat by a final score of 106-93, thus securing the championship once again for Los Angeles.

When it was all over, there was LeBron, adorned with purple and gold confetti and holding in one hand the Larry O´Brien Trophy for the NBA Championship and, in the other, the Bill Russell Trophy for being, once again, the NBA Finals MVP.