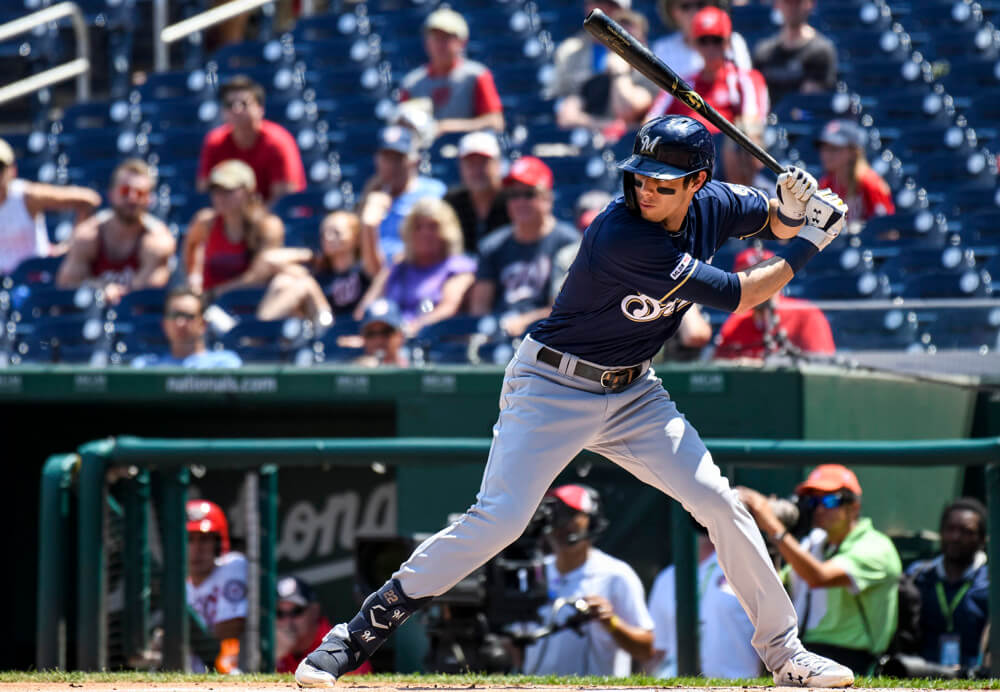 Baseball is back! We think. Each day, SportsIntel’s Matt DeSaro will take a look at two of the 30 teams in Major League Baseball as we head toward MLB Opening Day in late July and we continue today in the NL Central with the Milwaukee Brewers.

For the second straight season, the Milwaukee Brewers surged in September and slid into the National League Wild Card game.  Unfortunately, they fell victim to the first of the Nationals late-inning comebacks en route to the World Series. This started a premature, but hopefully busy off-season for the Crew.

And while it was a busy off-season, most of the action was players heading out the door.

The first player to leave for free agency was catcher Yasmani Grandal back on November 21st.  Grandal signed with the White Sox after the Brewers couldn’t compete with the four-year deal Chicago offered. The next exit was SP Drew Pomeranz just a few days later, signing a four-year deal with the Padres.  His second half was apparently good enough for another team to sign him to a long-term contract. Mike Moustakas was the next major talent to leave town, signing with division rival Cincinnati Reds.  He was one of the longest-tenured starters on the team and heading to another National League Central team had to hurt.

The names just kept on coming after that.  Jordan Lyles signed with the Rangers, Gio Gonzalez went along with Grandal to the White Sox and Eric Thames will be starting for the Nationals in 2020.

The high level of turnover is odd for a team coming off a couple of postseason appearances in a row and David Stearns had a lot of work to do to fill the roster spots left vacant. At one point the 40-man roster was down to just 32 players, but they did a good job filling the gaps while also keeping their payroll just over $100M.

Their first big Brewers signing ahead of the opening day was a bit of a confusing one as they picked up Avisaíl García.  While Garcia is a talented outfielder, they already had great starters and strong depth in the outfield.  Seems this is just a case of Stearns seeing a talented player at a good price and snatching him up through 2020.  Not a bad insurance policy when two of your outfield starters in their mid-30s.  Next up were Brett Anderson and Josh Lindbloom, who will be relied upon to eat up innings either as starters or out of the bullpen.  While neither are close to superstar talent, this was a necessary move to build their rotation depth with consistency.  Anderson is a well-known name in the league but the casual fan might not have ever heard of Josh Lindblom.  This would be due largely in part to the fact that he spent the majority of his last five years in the South Korean league.  What makes this interesting is that he won their version of the Cy Young the last two years in a row and was the outright MVP in 2019.  He is no spring chicken at 33 years old, but the Brewers were willing to take a flier on such a talented maybe.

The Brewers finished a December FA frenzy by signing Justin Smoak and Eric Sogard to strengthen their depleted infield.  Each player is a consistent player and will play significant roles in the success of this team in 2020, even with moderate playing time.  Sogard has a good chance of starting at third base while Smoak will play multiple positions as he is one to do.

Lastly, we come to Jedd Gyorko.  The veteran utility player signed for one year to even further the depth which this infield has.  Not only does Gyorko provide depth, but also flexibility with his ability to play anywhere and provide power at the plate.

This leaves the Bewers with a possible three platoons; first base, third base, and catcher.  While having depth and flexibility is nice, most top teams have full-time starters at their skill positions.  It will be interesting to see if the Brewers are looking to move away from platoons as we move towards the opening day of the 2020 season, or are happy to fill their roster based on matchups.

What Do The Brewers Do Well?

What the Brewers lack in start power the well make up for with depth and consistency.  While this might not be a team who is on a path to break any records, they are still capable of breaking a few hearts.

The platoons in the infield can be viewed as a positive despite being a bit non-traditional.  I personally like the fact that on any given night the Brewers are capable of managing their infield starters based upon who is starting that night.  They have good hitters from both sides of the plate who can also play multiple positions.  I think that this will aid them in many ways including durability throughout such a long season.

Milwaukee also has the good fortune to own one of the best closers in the league in Josh Hader.  Hader has been lights out since 2017, going 9-6 with a 2.52 ERA, 281 punchouts and 49 saves.  Last season he had a BAA of just .155 and shaved his walk rate from 3.3 to 2.4.  His big issue is the long ball, giving up almost two per nine innings.  He still needs to expand his secondary pitches while working on his location, but Hader still remains one of the best out there.

The final huge plus for the Brewers before opening day is that they have perhaps the best player on the planet in Christian Yelich.  The reigning MVP is coming off yet another career year and will be a favorite to repeat his performance from last season.

The Brewers’ biggest need in the off-season was to address their starting rotation.  While they did enough to keep them in the playoff hunt, I don’t believe it will be completely satisfactory.  The Brewers lost upward of 300 innings with the combined losses of Anderson and Davies.  The additions of Lauer, Anderson, and Lindbloom to join Woodruff and Houser make for a rotation full of questions.

Making matters just a little bit worse is the hole left at catcher when All-Star Yasmani Grandal left.  The Brewers responded by trading for Omar Narváez to join in a likely platoon with Manny Piña.  Neither of the two is an ideal candidate for a team in need of bats, but at least will serve Milwaukee well on the defensive side of the plate.

Another small concern for the Brewers is their situation at first base.  As it stands now, it appears that Ryan Braun and Justin Smoak will split time there.  This might be another reason for the Brewers signing of Avisaíl García.  Allowing Braun more time at first and therefore less stress on his 36 year old body.

Third base could also prove to be a weak spot in their lineup which will probably be filled by Eric Sogard.  This one could really go both ways but I’m sure the Brewers wished they had a bit more of a quality player at the hot corner.

As we countdown to the MLB season opening day, what does this all mean for the Brewers’ chances of seeing 32 wins in 2020?  The Brewers got red hot at the end of last season and finished with 89 wins after struggling early on.  What gives me hope about that late sure is the fact it was done mostly while Christian Yelich was out hurt.

After Yelich fractured his kneecap in September, the Brewers didn’t even stumble.  In fact, the Brewers won more often without Yelich last year.  They were 67-63 up until September 10th and went 22-10 down the stretch with their stud on the shelf.  I am certainly not suggesting that this team is better off without Yelich.

That would be crazy talk.  But I do love the fact that this team rallied around each other and won despite the loss of the best player in baseball.  I think this bodes well for their chances to win a very do-able 32 games in 2020.